Klopp says buying a central defender not likely due to Covid 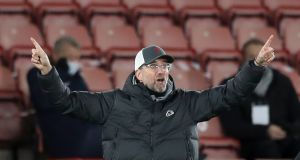 Jürgen Klopp: “It is not a time for massive investment if you don’t have the funds for it. Obviously football clubs live off what they earn.” Photograph: Naomi Baker/EPA

Jürgen Klopp has said Liverpool are unlikely to sign the central defender they want in January because of the effect of the Covid-19 pandemic on the club’s finances.

The Liverpool manager admits his squad needs reinforcing in central defence having lost all three senior centre-halves – Virgil van Dijk, Joe Gomez and Joël Matip – to injury, which has led to the midfielder Fabinho playing out of position for most of the season. But Klopp said an addition “is just not likely” with no financial recovery from lockdown in sight.

“If the world was in a completely normal place and we have this situation, you could be sure we would try everything to do the right thing now,” he said. “But the world is not in a normal place so I don’t know why we constantly treat a football club like it as independent from all the other struggles around.

“It is not a time for massive investment if you don’t have the funds for it. Obviously football clubs live off what they earn. We still don’t have supporters in the stadium, a lot of stuff is still different, and that has gone on for a long time.

“So I don’t understand why people now talk about the situation like nothing happened. We are still in the middle of a pandemic so that’s not the best time we’ve ever had.

“I cannot go to the owners and say: ‘Without that we cannot win anything.’ We have to make the best of it, and that is what we have always done. It’s not that nobody wants [a new central defender]; the question is if we can.”

Klopp insists Fenway Sports Group, Liverpool’s owner, shares his desire to strengthen in central defence but should not jeopardise the club’s finances in the notoriously difficult January market.

“They see exactly the same things I see about the necessity to sign players and things like this.

“It is not that I say: ‘A centre-half would be really nice,’ and they say: ‘Wow, a centre-half? Really? Why?’ It’s all clear. It’s all on the table. We work on it, as you can imagine, but January is not the easiest transfer window and on top of that it is not having the money exactly as you want.”

Klopp described the appointment of Dr Andreas Schlumberger as Liverpool’s head of recovery and performance as an important step in the treatment of injuries.

“If you ask people in this area – rehab, performance, recovery – he is No 1 in Germany. I have known him for years. We studied at the same university and I followed his way all the way through.

“We worked together for Dortmund for a few years. He went to Bayern, worked for Gladbach, worked for Schalke, Nuremberg, for the German FA and national team as well, so the CV is absolutely incredible.”