TV View: Liverpool legends get their moment – glitches and all 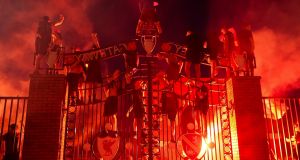 It was just after Graeme Souness, sitting in his back garden last Thursday night, kind of suggested to Sky’s David Jones that Liverpool might never stop winning the Premier League now that they’ve cracked the code, that a humongous bolt of lightning illuminated the heavens above him.

You could, of course, interpret this in a number of ways, e.g. it was proof that God is, say, a Manchester United fan and Souie had incurred His wrath. Or, perhaps, He was saluting the divine intervention of Jürgen Klopp, His representative on earth, in the history of Liverpool FC. Or it could be that it was just lightning and didn’t mean anything at all. You’d be left wondering, though.

The happiest non-Liverpool fan on the night was probably Gary Neville because it was BT Sport, and not Sky, who had live coverage of the Chelsea v Manchester City game, the outcome of which brought to an end Nev’s 30 years of mirth. He, then, didn’t have to sit there pretending to be chuffed for Liverpool, that burden falling on Rio Ferdinand.

“I didnae see you jumping outta your seat,” said Kenny Dalglish to Rio when he popped up on BT’s Zoomy screen, the fella wearing a Liverpool scarf so large he almost disappeared in to it.

Jake Humphrey did his best to have a chat with a highly elated Kenny, but it sort of went like this:

Kenny, then, hadn’t figured out how to silence his congratulatory text messages, which Jake tried to chuckle about, but in the end you sensed if he’d got hold of Kenny’s phone, it would have ended up in the Mersey.

Things didn’t get any better when Jake tried to talk to Jordan Henderson.

Whichever BT employee revealed the Zoom code for their link-up with Jordan, thereby inviting an avalanche of requests to join the chat from watching fans, and couldn’t figure out how to quieten the WHUPPs that accompanied each request .... all you can hope is that their job-hunting goes well.

Not that Sky’s special later in the night went without a hitch. Kenny, still wearing his monster scarf, appeared again, this time the noise in the background making it sound like he was hosting a rave.

Jones: “Kenny, Could you turn your TV down?”

Kenny: “I never bought my licence.”

Jamie Carragher made an appearance too, and had special words for Captain Henderson, the man of whom Jason McAteer once said, “he’s a player who likes to do his business in the middle of the park”. He’s number one this season, though, having had to settle for number two the last.

“Jordan, you’re a great professional,” said Carragher, “but tell me that you’re going to get absolutely rotten tonight - LIKE ME,” and with that he brandished a bottle of champagne, the fella evidently about to embark on the mother, father, aunty and uncle of all parties.

Phil was sipping champagne too, savouring every dribble. “We are back on our perch,” he said. “I won’t use the expletive that went before it, but: We. Are. Back.” Somewhere, you’d have a notion, a man from Govan was throwing his beeping remote at his telly.

1 Tipping Point: DeChambeau’s transformation raises questions, but who will ask them?
2 Monica Seles: The warrior queen who could have been the best ever
3 Tottenham take the gift of Keane’s own goal and grind out the rest
4 Bagger's three-ball plays with history
5 Ken Early: Resurgent United can be the top team – in Manchester
Real news has value SUBSCRIBE