All in the Game: Alan Brazil does not like vegans

Meanwhile, absent McCormack is in the money, quotes of the week and much more 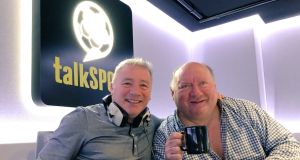 Exchange of the Week

That’d be the one between Alan Brazil and Ally McCoist on talkSPORT radio when they discussed the less than fabulous performance by Hector Bellerin for Arsenal against Atletico Madrid in their Europa League defeat. Brazil reckons Bellerin’s loss of form is easily explained – it’s because he’s become a vegan.

Ally: “And you put it down to his diet?”

Ally: “So him getting caught the wrong side of [DIEGO]Costa last night was down to a dietary mistake?”

Alan: “Absolutely. Look at Costa – do you think he has a Caesar salad every Sunday lunch?”

Ally: “Na, I think he has a blinkin’ Friesian and chips.”

Absent McCormack is in the money

It was a year and a bit ago that Steve Bruce decided his relationship with Ross McCormack was going nowhere, Aston Villa’s £12m signing from Fulham driving the gaffer to distraction. He’d already concluded that the striker’s fitness, time-keeping and attitude left quite a lot to be desired, the final straw arriving the day McCormack rang the club to say he couldn’t make training because his electric gates had malfunctioned and he couldn’t get out.

Bruce, not best pleased about the situation, drove to McCormack’s house and noted that his wall was only 4ft 6in, so he could have scaled it easily enough and got himself a taxi to training. “It was icy and raining – what if I’d rolled my ankle,” was McCormack’s response to that proposal, which didn’t help.

Any way, Bruce had had his fill, first shipping McCormack out on loan to Nottingham Forest, and, this season, down under to Melbourne City. His stint there is done and he has returned to England, although he’s highly unlikely to play any part in the playoffs for Villa.

And if they’re promoted to the Premier League, McCormack, despite not playing as much as a minute of league football for them this season, will see his salary rise from £2.3m to £3m, thanks to his initial contract which has two years remaining. The loud bang you hear is Steve Bruce’s head exploding.

“It was a no-brainer for me.”– Steven Gerrard explaining why he’s taken on the Rangers job. Some folk rather cruelly interpreted that remark literally.

1,000: That’s how many pounds Wolves fans raised to fly a plane pulling a ‘Boing Boing Bye Bye’ banner over the Hawthorns on Saturday in anticipation of West Brom being relegated. Which they weren’t (yet). Mean? Very.

A bargain journey to get to Kiev

In the wake of soaring costs for flights to and accommodation in Kiev for the Champions League final, the London Independent very kindly researched the “optimum strategy” for Liverpool fans to get there on a budget. Outstanding research it was too because they came up with a mega bargain price of £200 for them to get there and back. The but? It’s quite a big one.

The trip would involve getting to Luton Airport from Liverpool on the Thursday and flying to Debrecen in north-east Hungary where you would have to stay overnight. The following morning you’d get a train to Zahony on the Ukrainian border and from there you’d walk/hitch/taxi the one mile to the Ukrainian frontier city of Uzhgorod. You’d then hop on a bus that will take 12 hours to get you to Kiev, arriving Saturday morning.

The return leg is trickier. You have 80 minutes after the final whistle to get from the stadium to the station – if there’s extra time you’re banjaxed. You take an overnight sleeper train to Uzhgorod which takes 15 hours. From there you have to cross the Hungarian border and get to Zahony to catch the train to Debrecen from where you will fly back to Luton on Sunday night. And all that’s left then is the three hour drive home to Liverpool.

Then? You’ll sleep for six months.

“I’m dying of laughter.” – Roma president James Pallotta tremendously upset after Uefa charged him with improper conduct for his criticism of the officiating in last week’s game against Liverpool.

“It’s only one season. For the level of Ronaldo and Messi, he has to do it for seven or eight years. He still has a long way to go.” – Aston Villa’s Ahmed Elmohamady with a, eh, warm tribute to his Egyptian teammate Mo Salah.

“I am still in contract with Leicester so at the moment I am here and we will see. With me, especially, you never know what is happening. Every time I have to go but I am still here. I don’t really want to talk about whether I am going, or staying. We will see what will happen for me.” – Riyad Mahrez clears up any doubts about his future at Leicester. In no sense at all.

“How can someone like Carragher lecture me? The guy who spat on a girl from his car!” – Marouane Fellaini had already called Jamie, who is not a fan, “the world champion of breaking legs”. Now this.

“I threatened him because he became more famous for making videos than playing, but he doesn’t do that anymore because I told him I’d knock his teeth out.” – AC Milan coach Gennaro Gattuso on how he persuaded 19-year-old Hachim Mastour to focus on becoming a better player rather than one known for viral videos of him doing tricks. You’d focus too.

Goalkeeper’s Jersey of the Season

The award goes to Ferro de General Pico in the nether regions of the Argentinian league who have created a jersey for their goalie Nico Caprio that features Homer Simpson rather famously disappearing in to those bushes.

Why have they done this? We have absolutely no idea. But it’s outstanding.

As tweeted by an 18-year-old who was trying to get a break at Queen’s Park in the Scottish Third Division.