All in the Game: Silence golden and respected for Messi

Ineffective Berbatov gets a lot off his chest, quote of the week and by the numbers 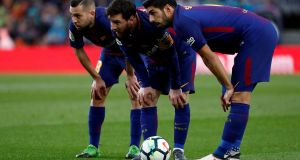 Barcelona’s Lionel Messi made sure that his neighbours wouldn’t be making a racket. Photograph: Reuters

Buddy Berbatov gets a lot off his chest

While Robbie Keane was preparing for his first game as player-coach of Indian Super League side ATK, his former Spurs buddy Dimitar Berbatov was heading home to Bulgaria after Kerala Blasters’ less than impressive league campaign ended.

Having finished runners-up last season, Kerala had been among the favourites to win the league this time around, but they only finished sixth and missed out on a place in the semi-finals.

Berbatov’s contribution after signing for the club last summer? One goal in nine appearances, with injuries reducing his playing time to just over 500 minutes. He wasn’t quite on Chinese Super League money, his salary reckoned to be around the €1.12 million mark, but still, Kerala would have hoped for a little more, even if he is now a rusty 37.

The club still hope he’ll be back for their Super Cup campaign, but you’d imagine his coach, former England goalkeeper David James, would be less enthused about his return. Berbatov’s hashtag-a-rama message on Instagram?

Liverpool no draw for ‘winner’ Sneijder

Maybe it was the weather that had everyone cranky, but a lot of footballing folk came out with decidedly miaow-ish comments last week.

Like mega agent Mino Raiola who doesn’t get on too well with the AC Milan hierarchy, which is awkward because one of his clients is their rather useful young goalie Gianluigi Donnarumma.

Despite only signing a new contract last summer, Raiola still reckons it’s time for Donnarumma to move on: “He’s not yet the best goalkeeper in the world, but he’ll become that if he makes the right choices in his career. He has to go to a top club next year.” Oooh.

Mind you, former Spurs manager Andre Villas-Boas’s take on Harry Kane’s future probably topped that on the Ouchometer: “If he has a hunger for trophies he would have to leave Spurs. If he has no hunger for that, but wants stability, he would stay at Spurs.”

Topping the ouchy list, though, was Wesley Sneijder’s response when he was asked why he didn’t join Liverpool from Inter Milan in 2013 when they wanted to sign him. He opted to move to Turkey instead.

“Why Galatasaray and not Liverpool? I am a winner. I play for prizes, so I went to Galatasaray.”

There are many benefits to being Lionel Messi, not least being a bit useful on the footballing front. One of the very best was revealed last year by his team-mate Ivan Rakitic – Messi’s neighbours were a bit noisy, so he just bought their house from them, making them an offer they couldn’t refuse. Like you do. So now his neighbours are only the friends and relatives he chooses to put up in the house next door, the deal presumably being that they don’t make a racket.

Barcelona’s El Prat airport applied for permission to build another runway. They’ve been turned down, both for environmental reasons but also because it would cost the sun, moon and stars.

Another reason? According to Javier Sanchez-Prieto, president of Spanish low-cost airline Vueling, the application was rejected because . . . “you cannot pass over where Messi lives”.

PSG rub it in

How much love is lost between Paris Saint-Germain and Marseille? Not a lot. They played each other twice last week, in the league and the cup, and PSG won both 3-0. Their Twitter message to Marseille: “Thank you for your visit to the capital. You can come back to Paris whenever you want, you will be well received.” Followed by that face. Their next meeting should be tasty.

“As long as my players show respect not for me, but for their team-mates and the club – I will tear my heart out of my chest and let them play keepie-uppie with it” – Gennaro Gattuso makes quite a hearty pledge to his AC Milan players.

20th - That’s where Everton are in the Premier League table for shots and shots on target since Sam Allardyce took over. Bottom, like. Toffees well and truly stuck.

“You guys treat me like Kim Jong Il, like I’m sitting with a button I’m about to press at referees.”

– Neil Lennon aggrieved with the Scottish press for implying that he dislikes refs so much he’d like to nuke them. He’s probably been tempted though.

“I had just scored three goals and everyone signed the ball. Everyone put ‘You’re the best’ or ‘congratulations’. Rafa Benitez put ‘Today, you lost the ball eight times’.” – Fernando Torres recalling Rafa’s rather exacting standards as a manager.

“If you are playing Man City or Man United, we must listen to the music that they put on. But we made West Ham dance to our music and it was rock and roll this afternoon in the Liberty.” – Carlos Carvalhal after his Swansea side rocked West Ham (4-1).

Who said: “Apart from being handsome, I think you have to like yourself. I’m not going to say I look like a Prince, but . . . I look in the mirror and I like what I see. And I like to look at myself, of course.” Was it: (a) Sam Allardyce, (b) Shane Duffy or (c) Cristiano Ronaldo?

“The game was not all negative. There were a lot of positives. I believe that we had a very dynamic game and put a lot of effort in.”

– Arsene Wenger after his lads’ latest 3-0 defeat by Manchester City. They’re getting old, but the Comical Ali comparisons remain apt.

“When you have just the trousers on it’s easy to take the trousers off as well. But when you are naked completely you have to find the shirt to try to put it on again and dress normal again.” – Arsene Wenger after that defeat by Brighton. Your guess is as good as anyone’s.