TV View: Liverpool all heart but Ronnie’s still on a Debbie Downer 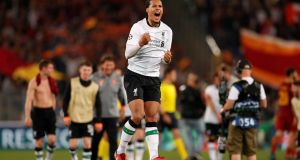 Thanks to the quirky way in which certain competitions are assigned to different channels, BT Sport 1 was bringing us live coverage of the National League playoff between Aldershot Town and Ebbsfleet United at the very same time BT Sport 2 had to make do with Roma v Liverpool in the Champions League.

Mind you, any Liverpool fans who began the evening with considerable hope in their hearts but then tuned in to hear the RTÉ lads’ pre-match thoughts might have opted to watch the tussle between Aldershot and Ebbsfleet instead, having had the wind firmly put up them.

First of all, what about the sudden departure of Jürgen Klopp’s assistant, Zeljko Buvac?

“They say Klopp is the heart and this guy’s the brain,” said Eamon Dunphy, “that means they’re going to Rome without a brain.”

What about Liverpool’s goalie, Loris Karius?

“He can be an accident waiting to happen,” said Liam.

“It’s vanilla,” said Eamon, “it doesn’t surprise you very much.”

The attack, though, it’s brilliant?

Eamon reminded us that they failed to score against Stoke.

And if Roma got an early goal the Liverpool players would, said Richie Sadlier, be thinking “one or two more goals and we could be facing a career-defining collapse”.

“I’d be worried if I was a Liverpool fan that this is not a done deal,” Eamon agreed, “the only real positive I can think of for Liverpool is that they start three goals up . . . but is that going to be enough?”

In fairness, being three goals up was a helluva positive, but by now you’d be half thinking Liverpool trailed by eight.

Still, though, Liam and Richie reckoned they’d go through but Eamon took the fifth amendment, saying he didn’t have a “strong opinion” about the result so he opted not to forecast one. “No strong opinion? That’s a bleedin’ first,” said Richie’s face.

“What we want tonight is for Liverpool to go through,” said Liam, to which that section of the nation with Manchester United allegiances replied: ‘Is that a Royal We, bud?’

Over to George Hamilton and Ronnie Whelan in the Stadio Olimpico, Ronnie reminiscing about his 1984 trip to the place when he departed the scene with a European Cup winner’s medal.

No more than the panel, though, he sounded a bit fretful about the evening ahead, so just as the Liverpool faithful might have thought it was safe to come out, they’d have returned to Aldershot v Ebbsfleet.

But Sadio Mane eased Ronnie’s nerves after Radja Nainggolan neatly found Roberto Firmino with a crossfield pass, Eamon’s pre-match highlighting of Nainggolan’s potential threat not taking into account that he might be a danger to his own.

Then James Milner equalised for Roma, and then Georginio Wijnaldum put Liverpool 2-1 up. Dizzying.

“That should be end of story,” said Liam. Richie agreed. “Liverpool are in the final,” he said, “ barring a collapse that is unthinkable.”

But then Edin Dzeko pulled one back and there was no hope at all left in Ronnie’s heart. “Liverpool are beginning to think they’re in the final! I think they’re a long way from it now!”

At this point you had to do a double-check on the aggregate score, Ronnie beginning to persuade us that it was Roma who led 7-4 and not the Pool.

Then Roma decided to score twice in the closing moments, waking George from his slumber and almost prompting Ronnie to have a hernia. The ref, though, ruined it all by blowing the final whistle.

But Ronnie was still in Debby Downer mode. “I don’t know where this Liverpool team can go from here,” he said, the answer being: Kiev on May 26th for the Champions League final.

For a directionless team, that’s not a bad port of end-of-season call. Guardiola, Mourinho, Conte, Pochettino and Wenger would sell their grannies for the same lack of direction, not to mention the Barca and Bayern gaffers.

The Liverpool lovers who switched back from Aldershot v Ebbsfleet to find out how their lads had done would have assumed they’d been ousted. Break it to them gently, they’re Kiev-bound.