Alex McLeish set to be confirmed as new Scotland manager 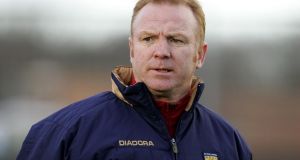 Alex McLeish is set to be appointed as Scotland manager on a deal until 2020. Photograph: Andrew Milligan/PA

Alex McLeish will be unveiled as the Scotland manager for a second time on Friday, the 59-year-old having agreed a deal until 2020 as the successor to Gordon Strachan.

The Scottish FA’s refusal to extend Strachan’s contract beyond the end of a failed World Cup qualifying campaign led to a strong pursuit of Michael O’Neill, which ultimately fell short as he opted to remain with Northern Ireland.

McLeish had always been perfectly vocal about a willingness to manage the Scots again; he did likewise in 2007 before moving to Birmingham City. Discussions with Scottish FA board members on Wednesday evening led to contract negotiations on Thursday, which were swiftly concluded. A statement on Friday morning will be followed by a media conference.

Walter Smith was briefly courted by the association but withdrew from the running after becoming frustrated at a failure to arrange a meeting. Despite widespread calls to interview Steve Clarke, who has enjoyed stunning success in the short-term at Kilmarnock, McLeish had the firm support of the Scottish FA’s president Alan McRae and vice-president Rod Petrie.

McLeish, who has been out of work since a spell with Egyptian league side Zamalek in 2016, will be charged with ending a Scottish wait for a major finals appearance which stretches back to 1998. The Scottish FA, meanwhile, must now step up the hunt for a chief executive after the sudden departure of Stewart Regan.

Liverpool reverse decision to use government furlough scheme 18:55
McLaren boss warns coronavirus impact could threaten Formula One 18:45
New PGA Tour schedule could bring an end to the year like no other 18:42
Jones says new players will form 60 per cent of England’s next World Cup squad 18:30
Travel restrictions could hit Ireland hard when racing returns 17:34