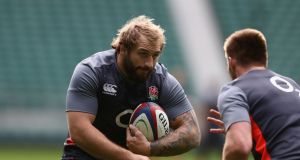 This is an effort to address growing concerns about concussion in the game.

After 611 head injury assessment (HIA) incidents were reviewed from 1,516 elite matches, the sport’s governing body found that 76 per cent of HIAs occurred in the tackle, 72 per cent of them resulted in the tackler being injured with “body position, speed and direction of tackle all influence risk”.

Therefore, reckless contact with the head area will now result in a penalty and yellow or red card.

“A player is deemed to have made reckless contact during a tackle or attempted tackle or during other phases of the game if in making contact, the player knew or should have known that there was a risk of making contact with the head of an opponent, but did so anyway,” World Rugby has stated.

There has been criticism from current players such as England prop Joe Marler, who tweeted on December 18th: “The game isn’t what it used to be – blazer bells need to stop changing the rules, it’s becoming ridiculous shite!”

Former England and Lions lock Simon Shaw also ridiculed a French referee’s decision to sinbin Lyons’ Delon Armitage for a forearm to the face of an opponent.

The new law interpretations leave players open to sanction – sinbin or sending off – should he or she slip up on the tackle from a legal position below the shoulder before making contact with the neck or head.

There is also an educational drive to ensure the tackler is “bent at the waist” when entering contact, because this “is the optimal position for injury prevention.”

This should see the international game being officiated differently during the Six Nations.

It remains unclear, however, whether the actions of Dylan Hartley, who was sent off for a high swinging forearm to Seán O’Brien’s jaw in the recent Leinster v Northampton game, will merit more than a six-week suspension.

The same goes for Malakai Fekitoa, who received a yellow card and one-week suspension following a high tackle on Simon Zebo in the Ireland v New Zealand game in November.