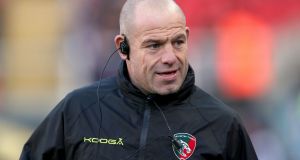 Richard Cockerill, who has been fired as Leicester Tigers’ director of rugby. He will be replaced on an interim basis by Leicester head coach Aaron Mauger. Photograph: David Davies/PA Wire

The echoes of “happy new year” were still swirling around Welford Road when Richard Cockerill, Leicester’s director of rugby, was told that his 23-year association with the club had come to an end after an indifferent first half to the season left the Tigers in danger of missing out on the Premiership play-offs for the first time.

Cockerill, ever loyal to the club he joined as a hooker in 1992 and remained at since, apart from a two-year stint at Montferrand to end his playing career, said he respected the decision of the board while believing he was still the best person to be in charge. He was made director of rugby in 2010 after two seasons as head coach, but in the past three years the most successful English club in the professional era have lost ground to Saracens, Bath and Wasps, clubs built on debt rather than, like the Tigers, spending what they earn.

“It is with great sadness and regret that I leave my position as director of rugby with immediate effect,” said Cockerill, the third-longest serving director of rugby in the Premiership following Northampton’s Jim Mallinder and Exeter’s Rob Baxter.

“I still believe that I am the right person to lead the team at this present time but respect the board’s decision to make change as they see fit in the best interests of the club. I arrived back at the club in 2004 as an academy coach and leave as director of rugby with a record that speaks for itself and stands up against any in club rugby in the world.”

Cockerill was fired because success was in the past and becoming more distant. After reaching the Premiership play-off final for nine consecutive years from 2005, last winning it in 2013, Leicester have missed out in the past three years. Sunday’s defeat to Saracens left them with four victories in their last 17 Premiership matches against the champions, they have won at Wasps once since 2007 and they have lost their last six matches at Bath, conceding 130 points in their last three visits.

Aaron Mauger, the Tigers’ head coach, will take charge on an interim basis while the board looks at the coaching structure and whether to redefine the role of director of rugby with a greater emphasis on recruitment, one area where Leicester have suffered compared to their rivals in recent seasons: the ability of clubs to sign two marquee players outside the salary cap has left the best-supported side in the Premiership and the most financially secure struggling to compete.

The mix of Mauger and Cockerill was always going to be intriguing. The former, who played as a centre for New Zealand and finished his career at Leicester, is an exponent of attacking rugby while the latter is steeped in Leicester’s traditional attritional approach.

“The performance in Ireland was not what we wanted or expected,” he wrote, “but criticism of the club was well off the mark. We remain in a strong financial position and continue to invest large sums in support of the players, backroom staff, facilities and our academy. This remains a club with high standards and expectations.”

Which is why a league position of fifth with 10 matches to go and trips to Wasps on Sunday, Bath and Northampton to come, prompted a sacking every bit as painful as that of another club stalwart back in 2004 who also had 23 years of service, Dean Richards.

“We are a big club that deserves to be treated with respect,” Cockerill said last month when asked if he feared for his position. “There may be ups and downs on the way, but we will be around in 100 years, doing what we do. Whether I am here or not is irrelevant.”

1 Ken Early: Handball ‘crisis’ a timely distraction from the grim bigger picture
2 GAA Championships await and we need a button for the buzz of the crowd
3 49 and out for Corofin as their long Galway reign is ended
4 Arctic conditions in Ballymena and snowflakes in Paris
5 Tour de France: Every yellow jersey winner must feel guilty by some association
Real news has value SUBSCRIBE

Ballymun claim Dublin title as Corofin beaten; Man City thrashed by Leicester 07:35
Ken Early: Handball ‘crisis’ a timely distraction from the grim bigger picture 06:00
GAA Championships await and we need a button for the buzz of the crowd 06:00
Arctic conditions in Ballymena and snowflakes in Paris 06:00
More fireworks on club scene as Corofin’s long Galway run ends 06:00
Crossword Get access to over 6,000 interactive crosswords