Connacht’s Ultan Dillane ruled out for at least five weeks 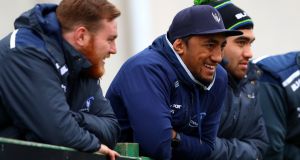 Connacht’s injury woes have deepened this week with Ireland international Ultan Dillane ruled out for at least five weeks.

Dillane will see a specialist this week to determine a treatment plan for the high ankle sprain he suffered playing against Ulster, but coach Pat Lam says the best case scenario is five weeks.

“If it’s rehab, then it could be five to six weeks; if it’s surgery, then it will be longer,” says Lam, but it will almost certainly rule the 23-years-old lock out of Ireland’s opening Six Nations tie on February 4th in Murrayfield.

Dillane is one of several key injuries ahead of Connacht’s visit to Wales to play an in-form Ospreys side in Saturday’s Guinness Pro 12.

Backrow Nepia Fox Matamua is unavailable having dislocated a rib, while captain John Muldoon, having recovered from a groin strain to play last weekend, is now ruled out with a hamstring injury from Monday’s training session.

And with Jack Carty having picked up a “minor calf strain” training with Joe Schmidt’s Ireland squad, Finlay Bealham and Matt Healy unavailable to train after suffering stomach bugs, Tiernan O’Halloran on “an overdue few days off”, and Kieran Marmion also on leave, Lam has been forced to limit the work load this week due to a shortage of fit bodies.

“Backs is the problem this week. We had a walk through and that was basically it – there were a lot watching. Every year we have had it [injuries] around this time, but I’ve never seen it as bad as this.”

Scrumhalf John Cooney is the only player due to resume training, but Lam says Marmion remains on standby, and scrumhalf Caolin Blade is covering the No 10 jersey in Carty’s absence.

“Kieran Marmion has to be given his week off following the November series, so he’s away on his break, but he’s gone to see his mum in Wales, so I told him to take his boots just in case Cooney doesn’t make it through.”

“We were trying to get Mitch for three weeks because he knew all the plays and all the systems, but he was down as a foreign player even though he played for the Connacht Eagles.

“Obviously if you go to a foreign player, it costs you a bit more, except for Mitch, who wouldn’t have cost us anything – I was not going to charge Connacht Rugby. We could get another Irish 10 who plays club rugby, but again, he’d have to learn all the plays and the moves, so thankfully we have got through so far. My worry is Jack [Carty]can’t train this week, and if he doesn’t make it this week, then Blade will play there.

“It is just the process we must work through. No one wants to have all the injuries we have, but you follow the process and I think the process is important, that is what makes Irish rugby stronger.

‘Yes, we are down on numbers, but you just have to get on. There is no point moaning about it, complaining about it, or worrying about it, just get on and be positive and make sure the next guy steps up.”