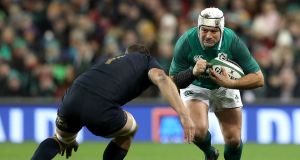 Ireland’s Rory Best with Santiago Garcia Botta of Argentina: Best has appeared only twice for Ulster this season due to a hamstring injury. Photograph: Billy Stickland/Inpho

In a surprise inclusion, Ireland captain Rory Best will line out with Ulster when they travel to Rodney Parade on Friday to meet the Dragons.

Best started in the front row for Ireland against South Africa and again in Ireland’s final match of the Autumn Series against Argentina. He did not play at all against Fiji in the second game of the series with Rob Herring opening for Ireland at hooker.

But it is a case of Best reacquainting himself to the Ulster set-up, although try scoring Jacob Stockdale and lock Iain Henderson are both resting up until Ulster resume their European Champions Cup campaign next week.

Les Kiss and his squad travel to the Twickenham Stoop to face Harlequins in round three of the competition on December 10th.

Ulster are hoping to bounce back from a 47-17 hammering from French side La Rochelle in their last outing, having beaten Wasps 19-9 in their opening home match of this year’s competition.

But a hamstring injury suffered by the 35-year-old Best followed by his international duty have restricted him to a measly two appearances for the province this season. Absurdly, Best has not been involved in a winning Ulster team in a Pro12 or Pro14 game since Connacht played in Belfast in December 2016.

“Rory Best is back in the fold,” confirmed Dwayne Peel, the former Wales and Lions scrumhalf and now backs coach with Ulster. “We’re hoping that Rory will be involved and having Stu [McCloskey] back is a big thing,” he said.

“He [McCloskey] has played particularly well this year and he played well against Fiji for Ireland. He has been good for us this year, so good to have him back in the fold. That’s where we are, there’s not too many changes from last week really,” Peel said.

Jared Payne has not played since a head injury on the Lions’ tour in June. The 32-year-old continues to suffer headaches after physical sessions, a problem which Ulster doctors have not yet gotten under control.

Sean Reidy is also back as is backrow Chris Henry. The international flanker is making a return after sustaining a collarbone injury against Southern Kings in Port Elizabeth earlier in the month

“It’s important to have Chris back for his experience,” said Peel.

The Dragons are in the middle of a complete overhaul of their rugby and are using this season to blood younger players. The announcement this week of Wales and Lions flanker Ross Moriarty has given the club a shot of confidence that it is being taken in the right direction.

The 23-year-old left English club Gloucester for the Gwent club. Had he remained playing there Moriarty would have been ineligible for Welsh Test match selection under new Wales Rugby Union (WRU) policies.

“There is a bit of buzz around them [the Dragons] because of Wales Rugby Union takeover and they signed [Ross] Moriarty yesterday, and he is a British and Irish Lion,” Peel noted.

“They are a proud region and they’ve invested a lot in youth. When they have been at home they have relied on home form and they have been particularly strong. I think Gavin Henson has given them a bit of direction at 10 along with [Sarel] Pretorious at nine.”

The Dragons have being concentrating on putting their thin player resources into winning home games. The knock-on effect is that they have being sending their academy players to away matches, where they have been running up high scores.

“The Irish provinces have such strength and depth it doesn’t really matter [for them],” said Dragons director of rugby and former Irish hooker Bernard Jackman.

“We have four guys involved in the Welsh side to play South Africa [at the weekend] so we are missing four. We’ve got 24 injured so I’ll be missing 30 players. That’s the issue we have at the moment.”

That said, Ulster were unimpressive against Benetton last week and desperation crept into their late win over the Italian side in Kingspan Stadium. Tommy Bowe touched down and so did Andrew Trimble two minutes from the end of the match for a tight 23-22 win.

“There’s areas we can improve in terms of execution and our kicking game but at end of the day we got the win we wanted and bled some young guys in the pack,” said Peel.

“It shows we have character to grind out those results and we are working hard ahead of the massive games coming up,” he added.

Rory McIlroy pleased with first start as he eases into 2020 05:00
Men in Black: The referees for Ireland’s Six Nations games 05:00
Racecourse betting ring rallies in 2019 with increase in turnover 01:00
Niall Quinn and Gary Owens reassure FAI staff about future 01:00
Sizing John set for return to fences in Irish Gold Cup 01:00
Here is your handy guide to sport on television this week