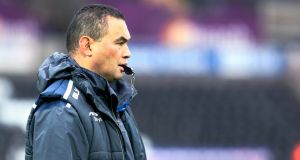 Connacht coach Pat Lam has urged his injury-ravaged squad to defy a host of potential absentees and make history by qualifying for the last eight of the Champions Cup.

The Sportsground outfit slipped further behind in the race for a top-six finish in the Pro12 after they were beaten 29-7 by new leaders the Ospreys.

Star out-half Jack Carty and flanker Jake Heenan were both forced off in the first half at the Liberty Stadium and with hamstrung captain John Muldoon also out, Lam faces a tough task to patch-up his team for next Saturday’s European meeting with Zebre and the trip to Toulouse the following Sunday.

Connacht sit third in Pool 2, but level on points with Wasps and Toulouse on 13. It leaves them right in the mix for a quarter-final spot and Lam said: “We need to dust ourselves off, park the Pro12 and we’ve got two massive games to try and get little Connacht into the last eight of the Champions Cup.

“We’ve got to get back on the horse and quickly. If Connacht can make the last eight in Europe - and we have a genuine chance in these two games - that would be massive for us.

“The next two weeks will determine whether we can achieve that goal or not.”

Lam will spend the early part of this week assessing just how many fit players he has available. Carty is the main concern with initial reports on Saturday indicating he had suffered serious knee ligament damage. Those fears were downplayed but while the 24-year-old will have a scan this week, it’s unlikely he’ll be fit to face Zebre.

If they are to progress in Europe, Connacht will have to improve on their performance in Swansea.

Tries from man of the match Dan Baker and the impressive Olly Cracknell put the Ospreys in control with Sam Davies adding two conversions for a 14-0 interval lead.

Connacht weren’t helped by losing both Heenan and Carty within the first half hour, but the home side played some impressive rugby and could have won by more. Wales flanker Justin Tipuric was at his supreme best in the loose exchanges and tries in the second half from Nicky Smith and Ashley Beck gave the Ospreys a bonus-point success.

Davies, who started at out-half with Dan Biggar among the replacements, kicked nine points in total as a try in the final 10 minutes from flanker Sean O’Brien was Connacht’s only consolation.

John Cooney converted, but Lam admitted his team made too many basic errors across the 80 minutes. He said: “A lot of our effort was spent in the wrong areas of the field and tidying up our mistakes.

“We’re disappointed. I said before the game we were coming down to a form side who were playing well and we had to play as a team. But we didn’t execute and I think there were over 24 turnovers at the end. We couldn’t secure our ball and we do look like a team that’s been put together, but I can’t fault the character we showed.”

Connacht have their resources stretched to the limit, especially in the backs, and an update on their walking wounded is expected this week. Replacement scrum-half Caolin Blade was forced to cover for Carty at 10 and wing Danie Poolman ended the weekend’s game at centre, summing up Lam’s predicament.

“We’re excited by the opportunity in Europe but we need to see what the injury situation is and reassess. We’ll know in the next 24-48 hours how the guys are,” he said.

“It makes it very difficult when you lose your seven and your 10. That’s our fourth 10 down now.

“We’re really low on numbers and a lot of our starters aren’t there, but we keep trying to improve and the moments when you’re struggling are when you get the most growth. We’ve got a lot of growing still to go.”