Munster get job in Paris done with least amount of fuss 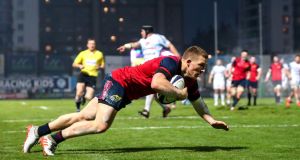 This was straight out of the Munster away-day manual. Quieten the crowd with a no-frills, low-risk game based on ball retention and territory, which also served to strangle the life out of an abject and abysmal Racing, and build scoreboard pressure.

Early in the second-half when Rory Scannell opted for a chip and chase from his 22, it constituted a surprise because it was so out of kilter with Munster’s overall performance, as well as his own judicious kicking game, which contributed to Munster having 70 per cent of the first-half territory to go with their 62 per cent of possession.

Their supremacy was also founded on rock-like set-pieces, where the Ryans, John and Donnacha, again excelled, a potent maul and an impenetrable red defensive line which again showed off their improved line speed, tackle execution and individual decision-making.

In actual fact Munster made more tackles (116 out of 129) than Racing, with the locks Billy Holland (17) and Ryan (15) leading the way alongside their leader from the front Peter O’Mahony (12) and Niall Scannell (11). Just as impressively, the quartet missed none between them as Munster conceded just two line breaks.

CJ Stander scooped yet another man of the match award for his try-scoring and 23 carries for 63 metres. His eagerness to get back into the line after charging down a kick by Benjamin Dembielle to then score from 25 metres by fending off Chris Masoe, no less, and then taking the tackles of Teddy Thomas and Anthony Tuitavke typified another barnstorming effort.

But it could just as easily have gone to Donnacha Ryan, who did so much gritty dirty work, twice forcing turnovers when almost single-handedly spoiling Racing mauls as well as a choke tackle.

O’Mahony paid tribute to a “mature” and “great team performance”, adding: “I think it was a great team performance and there was obviously some standout characters there. I thought Donnacha Ryan was superb today. He got through a savage amount of work and our lineout functioned very well off the back of his calling, so there were lots of guys who played very, very well. But the most pleasing thing was that it was an impressive team performance.”

“They played a huge game tonight, they were very direct and aggressive,” admitted Racing number eight Antonie Claassen. “They had a lot of ball and we defended for much of the first 40 minutes and it is very hard to stay in a match if you are defending all the time. The little ball we lost after three phases or else kicked away.

“It’s like with everything that happened in the first game that was supposed to be here, they came with such huge intent and wanted to pay homage to their head coach. They played a huge game tonight and good luck to them in the Champions Cup.

“At the moment, they have everything to go further and reach the quarter-final, semi-final and final. They have an awesome pack, a brilliant defence. Why not? With everything that has happened, why not?”

Defensively, Munster almost completely shut down Racing and, as with Leicester at home, would have shut the French champions out but for Simon Zebo slipping on the greasy turf to afford the home side a consolation try.

Zebo had earlier set Munster on their way with their first try, and his 50th for the province in his 110th game, and 99th start.

“It is nice when a guy like Darren Sweetnam’s loss can be covered. It is so hard last week and Andrew Conway steps up and it was nice to see Frankie came on.

“All the back-three did well today. But Zeebs is special, he finds tries where other guys don’t but then he gives tries away to the opposition which he shouldn’t,” said Erasmus, laughing. “But listen it is great to have a player of that calibre in the team.”

Munster’s current confidence in themselves, each other and what they are about is palpable, and according to O’Mahony, this emanates from pre-season.

“There’s been a buy-in for the last six months, since the guys have come on. We’ve put a lot of new things in place, well not that new but the plans that have gone into place everyone has bought in and it was no different this week.”

“We set our plan out and we went through Monday, Tuesday, Wednesday – three tough days of training and we had our plan set then. People had bought in and then delivered at the weekend so that’s all you can ask for.”

Nonetheless, O’Mahony and co are acutely conscious that Glasgow Warriors will present an entirely different challenge.

“We’ve plenty of stuff to improve on. At times, our discipline wasn’t where it should be. I think our tackling can improve as well, we can come off the line a bit harder. “There’s plenty of stuff for us to work on,” said the captain.

As an aside, that the Munster-bound James Hart was the only replacement not called upon despite the game being up long before the end highlights how his career has taken a cul de sac since leaving Grenoble for Paris, and hence his need to move to Munster next season as well as theirs.