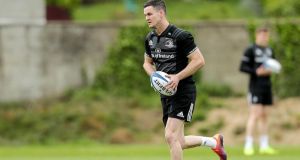 It feels like a lifetime ago since Leinster began the defence of their Champions Cup crown with a 52-3 thrashing of Wasps on Friday, October 12th.

The seven months since have been a rollercoaster ride for Irish rugby. The national side have beaten the All Blacks, been stuffed by England, lost their Six Nations crown and watched Wales win the Grand Slam.

Meanwhile, Leinster have been plotting a route back to another European final - a journey which has been assured, if not entirely smooth.

Leo Cullen’s side stand on the brink of history, and this weekend they could become the first side to win the Heineken Cup for a fifth time.

Retaining their title - and sewing a fifth star above the Leinster crest - would be one of the province’s greatest achievements. But it’s not going to be easy.

On Saturday they meet the might of Saracens, winners of the competition in 2016 and 2017 and favourites to reclaim their crown after a year in the European wilderness.

The stage is set for a final for the ages in Newcastle - it is a Test match masquerading as a club game. Here is everything you need to know before the cream of Europe rises to the top.

The Heineken Champions Cup final, between Leinster and Saracens.

The match kicks off at 5.0pm on Saturday May 11th, at St James’ Park - home of Newcastle United Football Club.

The good news is one of the best games of the rugby year is being broadcast on terrestrial television. You can watch the match free-to-air on Virgin Media One (coverage starts 4.0pm) and on Channel 4 (coverage 4.30pm) - not a bad way to spend your Saturday evening. It is also available on BT Sport 2 (coverage 4.0pm) and, of course, you can follow all of the action through the Irish Times liveblog from 4.15pm.

The majority of the 52,405 seats at Newcastle’s famous old ground are sold out but there are a very limited number still available to buy - you can pick one up HERE.

The defending champions sent out an ominous message to the rest of Europe on the opening weekend, as they eviscerated Wasps 52-3 in their first Pool One fixture. They were brought crashing back to earth in the second round however, as they were beaten 28-27 by a resurgent Toulouse at the Stade Ernest-Wallon. Any fears Leinster’s crown was slipping were quickly abated though, and they won their remaining four pool fixtures to set up a quarter-final with Ulster.

The Ulster quarter-final was a mini epic, forever to be remembered for Jacob Stockdale’s infamous botched try - and Leinster pipped their provincial rivals to win 21-18 at the Aviva Stadium. Toulouse’s shock last-eight win over Racing 92 set up a semi-final rematch - crucially to be held in Dublin - and Leinster thrashed the French, winning 30-12 at the Aviva.

Route to the final -

Saracens romped their way through a pool containing Cardiff, Glasgow and Lyon, winning all six of their fixtures and picking up four bonus points along the way. This earned them the status of number one seeds and a quarter-final date with poor old Glasgow, who were comprehensively beaten for a third time - Saracens winning 56-27 at Allianz Park. That victory set up a semi-final showdown with Munster at the Ricoh Arena in Coventry.

The province were without both Joey Carbery and Keith Earls and found themselves well and truly outgunned as the English Premiership side won 32-16 to reach the final.

Route to the final -

Leo Cullen will head into Sunday's clash with an unchanged XV from the one which beat Toulouse in the semi-finals.hat means Scott Fardy will start in the backrow, with Rhys Ruddock on the bench. Leinster’s main injury concern was hooker Sean Cronin, but he is fit to start. Leinster’s team will be announced at 12pm on Friday.

Mako Vunipola is fit to start. He injured his ankle in the Six Nations win over Ireland at the start of February, before lasting 62 minutes of the semi-final win over Munster. Mark Rhodes isn't fit, meaning Will Skelton comes into the secondrow and Maro Itoje moves into the backrow.

James Ryan, on his peer and future Lions teammate Maro Itoje: “I remember watching his meteoric rise a few years ago. It was admirable. You can see why he is such a good player. He is a complete secondrow in many respects in the fact he is so good over the ball as well. He is one of Saracens go-to players. They look to him for generating energy and momentum.”

Saracens and England hooker Jamie George: “But there’s a sense in the group we’re going somewhere special. We’re taking it to where no club has been before in Europe. That’s what it will take to win because these two teams are really pushing the standards of club rugby.”

Seán O’Brien pulls on the Leinster blue in Europe for the last time on Saturday, ahead of a move to London Irish after the Rubgy World Cup. And Gordon D’Arcy believes Seánie can be the catalyst for a fifth European Cup. . .

“Leinster need him to be the main man; a bulldozing run and quick presentation that allows them do to Saracens what no team has been able to do since Leinster put three tries on them in April 2018.

“Having missed the Bilbao final and it being his swansong for the club, he never wanted to leave, I can only imagine the deep well of motivation he brings into the environment this week.”

Leinster could start with 13 Irish internationals on Saturday, while Saracens fielded 11 England Test players - past and present - in their win over Munster. Add in James Lowe, Scott Fardy and Liam Williams and it’s a cast worthy of the biggest stage.

These two sides have won the Heineken Cup a combined six times between them - Leinster four times, Saracens twice.

This will be the fourth time the two sides have come across each other, with the current tally at 3-0 to Leinster.

They won 25-23 at Wembley Stadium in the 2010-11 pool stages, before a 43-20 home victory en-route to winning the competition. Leinster then beat Saracens 30-19 in last year’s quarter-finals, again on their way to lifting the trophy.

France’s Jérôme Garcès will be in charge on Saturday evening.

It might be the middle of May but the UK weather hasn’t held up its end of the bargain - showers are expected on Saturday with temperatures around 11 degrees.

Leinster in a European final in Newcastle? Howay the lads!

It should be a nice, quiet and relaxing weekend in the Toon. . .