Gerry Thornley at University of Limerick 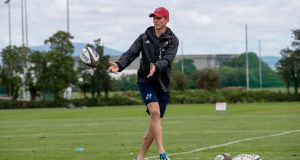 Munster’s reputation and cache abroad, even in the furthest reaches of the southern hemisphere, played a major role in luring Stephen Larkham overseas for the first time as the province’s senior coach.

A World Cup winning outhalf with the Wallabies in 1999, Larkham spent his entire playing career and first eight years as a coach in Australia before parting ways with Michael Cheika at the end of last year.

“I was born in 1974 and in 1978 Munster beat the All Blacks, didn’t they? You still hear about that. How did it happen? Johann gave me a call going back two and a half or three months now, and we had met before on the international circuit playing against one another.

“He said how interested he was in interviewing me and seeing whether I’d be right for the role. It’s an amazing club. It’s well-known around the world, the supporter base, they’re fanatics and it’s amazing what they bring to the game.

“I came over eight weeks ago after talking to Johann and had a bit of a look around. There’s a brand-new High Performance Centre, a really good roster, so it was a no-brainer. There’s so many positives for coming over here.

“As a coach from the Southern Hemisphere, I guess there’s always that lure and challenge of the European competition and I knew I needed to get over here at some stage. It’s a great opportunity here.”

Despite all of that, Larkham admits he played and lived in something of a rugby “bubble” until pitching up in Munster, and his eyes have already been opened.

“I’m one of those guys who lives in a bubble. I didn’t respect the Northern Hemisphere teams enough or the competition up here. Obviously, you’re so engrossed with the Super Rugby and Tri-Nations and Rugby Championship and Bledisloe Cup.

“My biggest rival growing up was the All Blacks, it was always about beating the All Blacks. There’s a whole other world up here. Looking at that game over the weekend, it was amazing to watch the raw power of England and the way Ireland battled through that game.

“Watching some of the Munster games from last year in the Pro14 and Heineken Cup, there’s some amazing rugby being played up here in tough conditions. So you’ve got to respect it. As a player, I didn’t respect it enough, but now as a coach, I’m learning to respect it better.”

Larkham’s remit is very much focused on Munster’s attacking game, and head coach Johann van Graan said: “He’s been very good, he’s only been here a week. Since we appointed him, we’ve been in constant contact but he had to finish up with Rugby Australia and it was important for him to finish that well. I got him at the airport last Sunday evening and he was training on Monday.

“Firstly, there’s a lot of excitement. He was a world-class flyhalf who has turned into an exceptional coach and we’re very lucky to have him. I’m looking forward to what he’s going to bring, not only from today and tomorrow but hopefully for a long time.

“He has specific ideas, we’ve spoken about moving our game forward, but not only in the attacking part of the game but in different areas of the game – the kicking game, across every situation because he has played 15 and 10. He’s seen a lot through his time as a player and a coach.”

“When we coached against each other with South Africa and the Wallabies, we met up after Test matches now and again but we didn’t know each other very well. Obviously, he went to the previous World Cup and so did I. His excitement and love for the game is evident, so it’s great to have him on board.”

‘I realised the book had helped people and that has been part of the healing’ 06:15
Ken Early: Liverpool have crumbled without Virgil van Dijk 06:00
To let the Games begin, or not: Three Irish athletes give their thoughts on the Tokyo Olympics 06:00
Eamonn Ryan’s legacy teaches us that things do change and get better 05:00
Garda coastal watch plan launched, and RNLI veteran retires 00:00
Crossword Get access to over 6,000 interactive crosswords