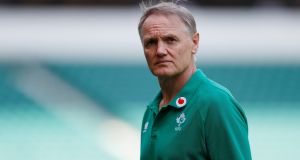 Reeling in the immediate aftermath of the heaviest loss in his 69-match reign as Ireland head coach, Joe Schmidt warned in the wake of Saturday’s record 57-15 defeat by England that past successes can no longer count when it comes to selection.

Barely 10 months ago, 10 of this Irish starting team were part of the historic win over the All Blacks. Watching this horror show unfold, that was hard to credit. Save for another try from one of those wicked Jacob Stockdale chips, there the similarities ended.

“Yeah, we have to be open-minded. I think Eddie’s selection is open-minded,” said Schmidt in reference to his English counterpart Eddie Jones. “He’s put some guys in there who hadn’t really formally been that involved in the England set-up.

“So for us, we’ll be looking hard and long, and it’s not going to be pleasant, at the footage and trying to piece together who has stood up and deserves to be in the 31 and who’s under pressure.”

After Saturday’s lineout shambles, which was a repeat of what Rory Best admitted was an “horrific” day in Cardiff last March, he is the obvious scapegoat for being the thrower, Ireland’s captain having turned 37. All of which undoubtedly makes his ongoing presence in the team now a real issue.

But two of the lost lineouts were after he’d been replaced. Furthermore, amid the pointing of fingers toward Best and the older guard, several of whom had very low-key games, the young tyros were no less culpable for this performance.

The missed tackles column making for particularly grim reading virtually everywhere, and especially across the entire backline. There was also negligible impact off the bench.

In the continuing absence of Johnny Sexton and Joey Carbery, Jack Carty is likely to given his first test start against Wales next Saturday, having won his third cap off the bench there last March.

During training in Portugal, a maul collapsed on Sexton, giving him a leg strain in the process, but contrary to some fears out there it is not thought to be serious and he should line up in Ireland’s final warm-up game at home to Wales on Saturday week. In the interim, James Ryan, Robbie Henshaw and Keith Earls could come back into the equation this week. Schmidt confirmed that Conor Murray passed his HIA, while Cian Healy’s x-ray revealed no more than a sprained ankle.

This defeat eclipsed the 43-20 defeat by Argentina which has driven the coach to put that to rights ever since, and presumably has informed the preparation which left Ireland so short on Saturday at Twickenham.

Yet even though the upcoming games against Wales begin with a less than promising trek to Cardiff for Warren Gatland’s Principality Stadium farewell and a Welsh World Cup send off, the scale of this defeat has upped the ante for Ireland.

“Look, we want to win every time we play so the result is always part of the formula for us. We can’t afford to focus on that, because it’s all those other elements that go into getting you the result.

“There are so many of those process-related elements that have to become the focus, because the actual score – while never irrelevant because it’s a Test match – it isn’t at the fore of our thinking.”

Schmidt won’t panic, but will instead draw on his experiences as a coach.

“I said to the players after the game: ‘Look, I’ve been coaching professionally for 17 years, I’ve had these days’. I think there’s two or three of them, so they are very, very rare and we have turned them around each time. I do firmly believe that we can.

“When you have a game where so many elements of it don’t come together it is very hard to get into the game and I think we made it easier for England than it should have been. England are a really good side and so they took advantage of whatever we did offer them and it is incredibly disappointing.

“I would have to say, I knew we were a bit vulnerable but we contributed to a greater vulnerability because we didn’t look after the ball well enough from set-piece, we didn’t really stop their momentum, slipping off 34 tackles like we did.”

Best admitted that Ireland had been slow to their lineouts, which may have been an attitudinal issue, but Schmidt will also draw on his belief that his players’ attitude is not a problem.

“I have been incredibly lucky for the last six and a half years to work with a group of young men who, honestly, they fight tooth and nail for their country.

“They give up bigger contracts elsewhere to stay here and try and make sure they do that. I don’t foresee it being a problem in the future.

“What I do know is that when you have a volume of work in your legs there’s a degree where you can get will and mind over matter and a point at which your legs are a bit heavy and you’re a bit sluggish.”

“That is in four weeks’ time, but there’s pressure to make sure that we’re not too far off peaking over the next two weeks, because we need to get a lot of our process elements up to speed.”

Whether or not the Principality Stadium roof is closed is up to Wales, as it’s not a Six Nations match, and Schmidt believes that the hosts may want to have it closed so as to further replicate conditions in Japan.

Either way, the heat is certainly on now.