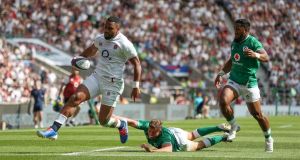 True, it was the first hit out of the season for all but three of the side. They were in warm-weather training in Portugal until Thursday, aiming to peak for four weeks from now. They also faced an English side match-hardened by two games against Wales and in Twickenham. But this was more than a little humiliating and potentially very damaging.

It has undermined confidence regarding the squad both within, now, as well as outside, with specific malfunctions that are liable to be felt for some time. It has also raised serious questions about selection.

Aside from rustiness and the lack of match hardness, nothing undermined Ireland’s dismal performance more than their malfunctioning lineout and defence, witness half a dozen lost throws and a scarcely believable 34 missed tackles.

With the Saracens spine in the pack, England have a wonderful defensive lineout and had clearly done their homework better too, perhaps drawing on the experiences of the last Lions tour given so many of the key protagonists here were in New Zealand.

Evidently looking to distract Rory Best, England threw up either George Kruis or Maro Itoje at the front, and held them up for an age, with the other of the two Saracens locks then going after the ensuing throw, to the middle or the tail.

Itoje picked off throws intended for Henderson and O’Mahony outside the English 22, thus twice denying Ireland their attacking lifeblood. Two more led to 14 utterly deflating points either side of the break.

Kruis snaffled a throw intended for Henderson on a defensive lineout which led to England’s third try before half-time and a soft fourth followed for Itoje after Best’s throw beat Henderson’s outstretched fingers.

As is invariably the case, it was a collective Irish failing, with general sluggishness, questionable calls and timings, and it’s one of the toughest skills on a rugby pitch, but many of Rory Best’s throws were off their intended mark.

Devin Toner’s importance to the lineout is usually highlighted in his absence, and Best will take the rap for Saturday’s implosion. That said, two more were lost after the skipper was replaced by Sean Cronin, and the latter had Toner to hit too.

Indeed, a record defeat in this fixture was sealed, fittingly, when Cronin’s throw slipped through O’Mahony’s fingers and amounted to a try-scoring assist for Luke Cowan-Dickie, and the impressive George Ford landed the conversion. That’s 21 points conceded off the Irish throw.

“It’s just too bloody slow,” bemoaned Alan Quinlan on Sky’s commentary, and Best conceded as much afterwards. There were also some curious calls, as to the tail at a defensive lineout when the Best throw had already been pilfered twice.

Hence, Henderson did many things well, and his rip from George Kruis at an English lineout and jackal over the ball ultimately led to ten of Ireland’s 15 points. But he has to take some of the culpability for the lineout as well.

This malfunctioning set-piece did much to undermine what had actually been a reasonably promising first quarter, but thereafter, Ireland were heavy legged, and from leading 10-8 after 26 minutes, they wilted in the blistering heat.

Their line speed completely evaporated from almost exactly then on. It’s also worth noting that 21 of those 34 missed tackles were in the first half.

Ireland looked like a team that had hardly been through one defensive session together, everyone seemingly doing their own thing with little in the way of communication as one mistake compounded another.

Even in that misleadingly competitive opening quarter there were the first signs of the disconnections and narrowness in Ireland’s defence when outflanked off a scrum.

It was not helped by Conor Murray switching to the blindside before Billy Vunipola fed Ben Youngs infield off the base, which immediately left them a man down with the full width of the pitch to defend, Ross Byrne and Bundee Aki were turned inwards and the concertina effect was to leave Garry Ringrose, Jacob Stockdale and Rob Kearney exposed in turn.

A second try followed from a five-metre scrum when Aki charged in toward Vunipola and actually collided with Nigel Owens, so leaving Byrne and Stockdale, who again shot up to no effect, utterly exposed as Manu Tuilagi scored virtually untouched.

A third followed off a scrum 35 metres out after the hour when Farrell pulled the ball back behind another decoy run by Tuilagi which drew in Ringrose and, as Andrew Conway drifted out, Joe Cokanasinga came off his wing to take Farrell’s pass and cruise through the ensuing gap. No less than the calamitous lineout, three first phase tries will not make for pretty viewing for Andy Farrell.

On his full debut, Ross Byrne began confidently enough, nailing a difficult conversion and a sweetly struck long range penalty, before Tuilagi’s charges and Ireland’s disintegration took its toll on him.

But there weren’t too many positives, save for that opening quarter, in which Rob Kearney countered infield and offloaded, left-handed, to Garry Ringrose before giving a left to right skip pass which led to Jordan Larmour’s try from Jacob Stockdale’s typically deft chip.

Cian Healy looked in better nick than most until his untimely ankle sprain, and will hopefully be okay, and Josh van der Flier gave a typically effective tackling display, even if the official stats seemed to overlook two misses on the thundering Tuilagi. He also won a badly needed turnover penalty on half-time.

There was also a fine finish from Aki, originating from an Irish lineout that worked, but they were about the only crumbs of comfort on offer. About the only Irish players to emerge without any collateral damage were those who won’t feature in this video nasty.

1 Business as usual for Ireland as October date looks likely for Italy game
2 Future Pro14 postponements to be recorded as 0-0
3 Not all hot dogs and dance cams: Hooliganism in US sport
4 Coronavirus threat ends Newcastle’s hand-shaking ritual
5 Decision day for the GAA in tight presidential race
Real news has value SUBSCRIBE