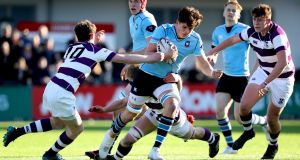 St Michael’s moved smoothly into the Leinster Senior Cup semi-final and a meeting with holders Belvedere as they saw off the challenge of Clongowes Wood in splendid sunshine at Donnybrook on Wednesday.

The Kildare school got out of the blocks nice and early through front-foot defence and centre Ben O’Shea’s sixth-minute penalty for not rolling away at a ruck.

St Michael’s took time to get their engines warmed up, left wing Andrew Smith giving them a boost from a mesmerising run which was the beginning of a smooth move for Ryan Baird to add real speed to the right corner for a 5-3 lead in the 10th minute.

The impression was of a quarter-final superior to the three that preceded it, further emphasised by a smashing second try from St Michael’s.

Lock Baird began it with a ball-shaking tackle which was quickly translated into a counter which ended with hooker Lee Barron crashing home for centre David Ryan to convert for a 12-3 lead in the 21st minute.

Clongowes just stuck to the gameplan and came hard for O’Shea to strike his second penalty in the 25th minute.

From there, Baird’s athletic take at a lineout was spoiled by exemplary maul defence.

Clongowes scrumhalf Conrad Daly broke the first line of defence and the handling was good enough to cause concern until prop Jack Boyle stooped to conquer a ruck.

St Michael’s were ruthless on the restart, Ryan, fullback Chris Cosgrave and Smith flowing down the left to set up camp deep inside the 22 where Dan O’Donovan dived over for Ryan to convert in the 38th minute.

A lung-bursting 40-metre gallop from lock Matthew Healy was the foundation for Ryan to kick three more points in the 42nd minute.

Clongowes had to react immediately and they almost did when O’Shea was spotted moving ahead of the kicker David Wilkinson for what would have been their first try.

They weren’t disheartened and came in lightening fashion for O’Shea’s inside ball to put John Maher through a hole and for number eight Matthew Martin to finish the move, O’Shea’s conversion reducing it to 22-13 in the 56th minute.