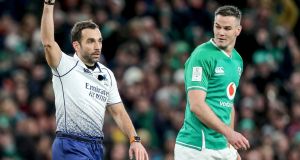 Last weekend, it seemed like Johnny Sexton was trying too hard not to annoy Mathieu Raynal. Photograph: Dan Sheridan/Inpho

Perhaps the main reservation about Johnny Sexton being made Irish captain was his history with referees. Let’s just say his on-field relationship with them didn’t always come across as particularly convivial. But, if anything, it seemed like he was trying too hard not to annoy Mathieu Raynal last week.

Then again, like many French referees, Raynal (and despite he and his officials missing plenty) seemed to be most annoyed by the chit-chat from Stuart Hogg, so much so that the Scottish captain felt moved to apologise.

Reflecting on his first game since becoming the new Irish captain last week, Sexton repeated how much he enjoyed the experience.

“I suppose the one thing for all of us is the build-up is so different. We have been so set in the build-up to international rugby over the last number of years with Joe [Schmidt], and everything has changed and we are trying to do different things like we used to meet up four hours before the game and now we meet up two hours before. So everything was new for me, new with the captaincy, and I found it busier at times but I enjoyed it.”

But he had one reservation about his captaincy.

“I thought I was okay. There were a few things I would have liked to have done differently in or around some of the decisions that went against us, I could have done a little bit better.”

There were few referrals to the TMO and in one phase of play, when Sexton felt he had been caught high, the crowd were livid that Hogg had effectively hand-tripped Jordan Larmour late. Furthermore, on another day, another team of officials might have sinbinned James Ritchie for playing ruck ball on the ground under the Irish posts, or Sam Johnson for shouldering a chasing Jordan Conway.

In times past, Rory Best might have made subtle suggestions to that extent, albeit there’s only so much remonstrating a captain can do.

“There were a few things we felt that maybe we could have checked,” admitted Sexton, “but look we had a good relationship which I suppose was the good part of it. How I can get him to maybe look at it is maybe an area I need to improve.

“He listened to me and I listened to him and we worked together but, yea, there were a few decisions there. I think Scotland said the same thing after the game, they felt hard done by. It always works itself out in the end.”

The main cause of the reservations regarding Sexton’s appointment for some was, of course, his captaincy of Leinster when they lost to Munster in Thomond Park in December 2018, and his dialogue with referee Frank Murphy made him the crowd’s pantomime villain.

But he was always going to learn from that experience. He’s too intelligent not to do so.

“One of the biggest games I learned from last year was in the game in Thomond Park where Frank – I played with Frank and I’m friends with Frank – kept calling me over. And every time he called me over, the crowd would go absolutely crazy. And then a couple of times I did speak to him, I had my hands out or I was speaking over him and I looked aggressive.”

“What I was saying was perfectly reasonable and acceptable for a captain to say but the way it was portrayed or the way things were taken was totally different. So it’s learning those lessons, speaking to a few ex-captains and talking about that lesson, and I got some good advice around that and hopefully I’ve been better since so, yea, a good lesson learned.”

There’s a balance to be struck between Mr Nice Guy and Mr Bad Guy, between making his point without irritating officials.

“Yea some of the best captains I ever watched growing up, they got the balance right but seemed to put the pressure on the refs quite well and Alun Wyn Jones is a great example,” Sexton admitted of his Welsh counterpart in this Saturday’s defining 2020 Guinness Six Nations meeting at the Aviva Stadium (kick-off 2.15pm).

“He has that balance right, where he has a good relationship with them but is able to apply pressure at times and sometimes get them to check things. So it is a bit of a skill and he’s obviously done it for a lot longer.”

Sam Warburton is another who springs to mind in this regard. Not many captains make a positive impression on Romain Poite, but Warburton’s relationship with him (in contrast to a frustrated Kieran Read) probably contributed to Poite reviewing, and then overturning, that late penalty decision against the Lions in the third test against the All Blacks which effectively ensured a drawn series.

The, em, self-assured Poite is the referee this Saturday and the one former Irish captain whom Sexton sought for advice was Paul O’Connell, which is somewhat ironic in that one felt he and Poite had a particularly strained on-field relationship.

“I don’t mind saying it, I spoke to Paulie,” revealed Sexton when asked. “He told me about one time when he was playing against the Ospreys and Romain Poite was reffing. He took his gumshield out and he had no teeth in and he spits through his teeth when he speaks.”

“Paulie looks angry at the best of times, even when he’s happy,” added Sexton with a laugh, “and he was just standing over Romain. What he was saying was probably perfectly acceptable but the way it looked and the way Romain felt was probably not quite right.

“Everyone makes mistakes in different parts of their game or leadership and I’ve made plenty over the years but I’d like to think I’ve learnt some good lessons.”