Six Nations to take no action on Murrayfield tunnel incident 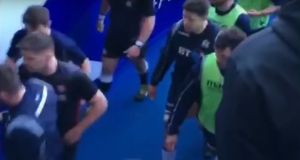 No disciplinary action will be taken following the alleged tunnel fracas between Scotland and England players before Saturday’s Six Nations match at Murrayfield.

Six Nations Rugby wrote to both teams seeking clarification over what happened as the players left the pitch upon completion of their warm-ups and, having concluded its investigation, announced on Wednesday that “no clear evidence of violent conduct or similar against any individual player” had been found.

Footage emerged earlier this week showing England centre Owen Farrell running between players from both teams before shoving Scotland’s Ryan Wilson to one side as he made his way to the changing room. The Scotland number eight turned, and other players looked to join the scuffle before the footage ended.

A statement from Six Nations Rugby read: “Six Nations Rugby gathered material from the RFU (Rugby Football Union) and SRU (Scottish Rugby Union), as well as from the BBC and the match officials. It also considered footage of the incident.

“It concluded that there was some evidence of pushing and shoving in the tunnel at the relevant time but no clear evidence of violent conduct or similar against any individual player.

Scotland have been handed a further boost after Wilson was been cleared of making contact with the eye area of Nathan Hughes during his team’s Calcutta Cup triumph.

The Scottish Rugby Union revealed the Glasgow captain was free to play in Scotland’s final two Six Nations matches against Ireland and Italy after a citing for alleged foul play was dismissed at a disciplinary hearing in London.

Television cameras caught the back rows clashing off the ball with Wilson, who was pinned to the floor, raking his right hand across the side of Hughes’ face. Wilson would have faced a minimum four-week ban if the panel had found him guilty.

Despite ruling that the backrower had committed an act of foul play by making contact with the face of Hughes, a disciplinary committee accepted medical evidence that the player has a pre-existing condition that causes two of his fingers to be involuntarily bent and although the contact had been reckless, it was unintentional as a result of attempts to grab his opponent’s shirt.

1 The Offload: Philip Browne’s grave outlook should be taken seriously
2 Tiger shines and Brady bites back as charity match proves an enjoyable release
3 Ken Early: Liverpool fans, Bamber Gascoigne and a close shave in Istanbul
4 Coronavirus: Leinster cancel sale of season tickets for 2020-21
5 As news gets better, can the pull of The Field be resisted?
Real news has value SUBSCRIBE

Coronavirus: Leinster cancel sale of season tickets for 2020-21 13:37
Tiger shines and Brady bites back as charity match proves an enjoyable release 13:03
Could Disney World be the NBA’s knight in shining armour? 12:42
Premier League must share wealth to ensure English football’s survival 10:54
All in the Game: Did Rory Delap’s long throws cause the 2008 financial crash? 10:00
Here is your handy guide to sport on television this week