Scotland coach Gregor Townsend says that his team need to narrow the gap between their very best and below par performances if they are to improve on their third placed finish in the 2018 Six Nations. Video: Reuters 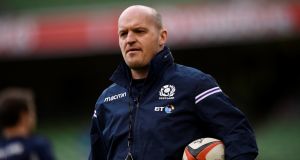 Newcastle backrow John Hardie makes his return to a Scotland squad for the first time since the 2018 Six Nations, while stalwarts Jonny Gray and Tommy Seymour could rack up their half-centuries of caps after being named in Townsend’s selection.

Clermont Auvergne scrumhalf Greig Laidlaw will again skipper the team in the absence of the injured John Barclay.

Scotland kick off their championship campaign at home to Italy on February 2nd and Townsend is looking to improve on last year’s third-placed finish.

He said: “There’s certainly been a lot of improvement from this group of players in recent seasons and I believe there’s much more to come. They’ve a genuine desire to get better and reach their potential in what is a huge year for our sport.

“In the past 18 months we’ve played 18 Test matches and have introduced 18 new players to Test-level rugby. Once again, our squad features players aiming to take that step, which is a testimony to their performances this season and the growing strength in depth of Scottish rugby.

“We are very proud of what a number of our players have achieved since the Autumn Tests, particularly with Edinburgh and Glasgow Warriors both aiming to make the last eight of the Heineken Champions Cup for the first time and both sitting in strong positions in their respective Pro14 conferences.”

Townsend added: “We’ve also seen some excellent performances from players representing clubs in France and England, which is a credit to their commitment and work ethic.

“It is a privilege for our players to be involved in the Six Nations, which is such a prestigious tournament and will be highly competitive once again.

“We look forward to taking on the challenge of Italy and working hard as a squad over the next two weeks to deliver a winning performance.”