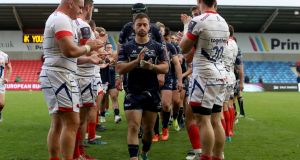 Connacht’s Caolin Blade leads his team off the field after a 34-13 defeat to Sale Sharks in October 2018 at the AJ Bell Stadium in Manchester. Photograph: Bryan Keane/Inpho

A fully-loaded Sale Sharks who are in the driving seat take on Connacht in this afternoon’s crunch European Challenge Cup fixture at the Galway Sportsground (3pm).

Steve Diamond’s Sale currently hold the trump card – in pole position and ahead by three points – ensuring Connacht will need to be at their best to see off the English outfit and claim leadership of pool three after this penultimate round.

Sale had taken a stranglehold on the group until unexpectedly falling at home to Bordeaux by 14-17, giving Connacht a real glimmer of hope. But having beaten Perpignan in France, Connacht now must negotiate today’s trickiest assignment before facing an away trip to Bordeaux, while Sale host the struggling Catalans in the final pool game.

Thus today’s fixture is a cup final for Connacht – “a must-win for both of us” according to Connacht coach Andy Friend. Both clubs have endured erratic starts to the season, but have recently found some consistent form.

Sale have been buoyed after recently taking down Mark McCall’s Saracens 24-18 in the English league, unbeaten for a fifth successive outing; Connacht’s results not quite as consistent, but performances have ensured points have been secured in every game since that 34-13 defeat to Sale in October in round two.

That Connacht have never beaten Sale will not worry Friend, but only help propel his charges in front of an expected sell-out at the College Road venue again.

“We are very much alive in two competitions, and want to reach the knock-out stages in both,” said Friend. “Sale are a really good side and we saw their quality when we played them away. Since then we have improved with every game and we also picked up a vital away win against Perpignan.”

Friend has made sweeping changes to the side that started against Munster last week with just four players, Cian Kelleher, Matt Healy, Jack Carty, and Eoghan Masterson in situ. Having missed all three interprovincial games with a leg injury, Tiernan O’Halloran returns to fullback, Ireland centre Bundee Aki partners Kyle Godwin in midfield, and James Mitchell comes in for Caolan Blade at scrumhalf.

Denis Buckley, who was a late withdrawal against Munster, finally makes his 150th appearance for the province, alongside Tom McCartney and Finlay Bealham, while Ultan Dillane and James Cannon supply the muscle in the secondrow. Captain Jarrad Butler takes over at number eight, with James Connolly having his third start at openside.

Diamond is also targeting this competition, and although he has included England Under-19 Kieran Wilkinson at outhalf, the hugely influential South African Faf De Klerk is named at scrumhalf. Add in internationals Chris Ashton, Denny Solomona, James O’Connor, Rob Webber and Bryn Evans, and this fixture has all the hallmarks of a winner-takes-all contest.