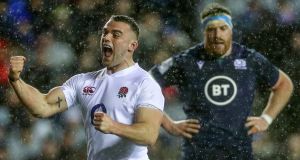 Sometimes the most forgettable of games leave the most indelible of impressions. Not for 20 years has a Calcutta Cup fixture been played in more atrocious conditions and seldom have so many travelling fans experienced so many problems getting home afterwards. For those left stranded by cancelled trains and planes, flying to Kolkata for the weekend would have involved slightly less hassle.

In one case an Easyjet plane which had flown from Edinburgh to Stansted was forced to abort its landing at the last moment and return to Scotland. Bemused passengers were subsequently informed their next available flight would be departing on Tuesday. With flooding close to the airport having also left car rental companies unable to release the majority of their vehicles, only a fortunate few made it back on schedule.

England’s players and management were among the luckier ones, having dodged the chaos by taking a prompt flight south on Saturday night. Rugby-wise they also managed to emerge shaken but, ultimately, not stirred. Victory has breathed fresh life into their championship prospects and, amid the swirling wind and rain, there were enough flickers of improvement to offset the disappointment of their chastening defeat in Paris.

Further improvement will still be required if they wish to win the title, but two successive home games against Ireland and Wales now represent an opportunity as much as anything else.

England’s pack were good enough in the wet for the most part to neutralise Scotland, who should probably have won in Dublin. With home advantage also to be factored in, Eddie Jones will be disappointed if they fail to rise to the Irish challenge.

Jones is also firmly of the opinion that games like this one are part of rugby’s rich tapestry. A dry ball, firm surface and bright sunshine clearly encourages a very different kind of match but, in Jones’s view, it is that in-built variety that makes the tournament unique.

“Rugby is a winter sport so until we make it a summer sport we should be playing in winter conditions,” he insisted, dismissing suggestions that a roof over Murrayfield might be the way forward or that Southern Hemisphere coaches would look down their noses at the lack of spectacle.

“The players have to adapt to the conditions and find a way to win. I think it’s the most intriguing rugby. To come up here and do that after we got a bit of a kick in the guts [in Paris] is one of the most satisfying wins we’ve had. Everyone in the Southern Hemisphere appreciates how tough the competition is here. I know that from talking to other coaches.”

Anyone who has ever played the game at any level will instinctively know what he means: a damp, mud-spattered dressing-room can be the best place in the world when you have just edged a tight, physically-demanding contest alongside your mates.

Casual sofa viewers who simply want sanitised rugby should get out more, according to Jones. “You get new fans by having a good product. And a good product is a game which is contestable, tough and played in a number of different ways. If you had that game every week for 12 weeks people mightn’t like it.

“It’s a pretty simple game in those conditions. You want the opposition to have the ball. But next week the ball might be fizzing around everywhere. It’s the great thing about our game that we can have different sorts of games. We don’t want to take that away, otherwise it becomes like 20/20 cricket. You know what the balance of the game is going to be all the time.”

Jones also has strong views on the subject of modernising the Six Nations, with reports continuing to swirl that South Africa, Japan and Fiji might one day join the championship.

“It’s called the greatest rugby tournament in the world and I think it is. So why would you want to add other teams that are going to decrease the level of competition?

“ I can only talk from experience. Super Rugby was the golden egg of rugby: 12 teams, brilliant, competitive. As soon as it expanded it lost its allure. You want the best teams playing against each other. There’s something about the Six Nations – because of the history of the relationships between the nations – that makes it outstanding. There is a lot of meaning to a lot of people for a game like this.”

The secret of rugby satisfaction, in summary, is simple: it has to genuinely matter to both the players and their audience. There should be no problem on that front for the rest of this tournament, with Jones hoping the first-hand experiences of the last two weeks has taught his side some important lessons about adapting under pressure.

Gregor Townsend, for his part, will simply be hoping his skipper Stuart Hogg has made his last costly misjudgment of the season, the fullback’s failure to deal properly with a George Ford grubber kick under his own posts supplying England with the field position from which their replacement prop Ellis Genge crashed over for his match-winning 70th-minute try.

With Finn Russell also having some pointed words to say about Townsend’s man management, these are not the easiest of times to be a Scotland head coach.

For coaches, captains and the travelling hordes of spectators alike, the Six Nations is nothing if not a proper test of character and stamina.