Saracens prove a mountain too far to climb for Leinster 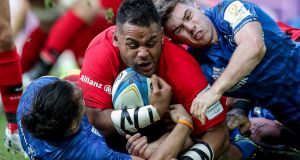 What was feared duly transpired. This wasn’t quite on the scale of England’s win over Ireland at the Aviva Stadium in February, but it was still reminiscent of that day in the manner that Saracens’ punishing and unrelenting physicality eventually bullied Leinster into submission.

Leinster fought the good fight in going toe-to-toe with a bigger force, sometimes withstanding barrages on the ropes and in turn even forcing Saracens onto them as well, even if they had to do more ducking and weaving.

They had their chances, too, and regrets they’ll have a few, most obviously in not protecting their hard-earned 10-0 lead better in the final throes of the first half, and then not converting their inroads in the early stages of the second.

In many respects it’s hard to be too critical of them wanting to further press home their numerical advantage when Maro Itoje was sin-binned on the half-hour. As Johnny Sexton said afterwards, hindsight judges whether decisions are deemed correct or not.

So it was that the decision to go for a scrum under the posts at 3-0 was vindicated by Tadhg Furlong’s try and thus deemed correct. Opting to keep possession and play inside their own half proved costly when Luke McGrath’s pass made Jack Conan reach high for the ball and he was hit hard by Alex Lozowski, on top of which George Kruis then nailed Sexton and Vincent Koch won the turnover penalty for Owen Farrell to kick Sarries’ opening points.

Similarly, when Leinster opted to place a McGrath box-kick from halfway on Billy Vunipola only for Rob Kearney to be pinged for not rolling away, and another penalty and two line-outs later Saracens drew level, that option was deemed wrong. But it’s hard to be too critical of a team being positive and trying to force another score.

Had that McGrath box-kick led to Kearney winning the ball in the air and, say, even a three-pointer, Leinster’s tactics would have been applauded. They have to believe they are capable of scoring at all times. They’re competitive sportsmen, and a team of proven champions.

They looked sure to do so in the 47th minute when mounting another assault inside the 22, James Lowe’s exchange with Sexton for once putting Saracens on the back foot; several recycles later, they had engineered that five-to-two overlap when Garry Ringrose, whose decision-making is normally so good, opted to straighten into traffic.

That would prove their last real chance as ultimately Leinster were kept scoreless from the 33rd minute onwards. Sarries cranked up their power game, first forcing a penalty to take the lead and have Scott Fardy harshly yellow-carded, and then maximising that advantage when Billy Vunipola forced his way through Rhys Ruddock, Sexton, McGrath and Lowe for the deciding try.

The salutary truth is that Leinster were defiant to the last, and actually played very well collectively, and individually

Thereafter Saracens did their front-running thing as their all-enveloping defence pinned Leinster into their own half. Their levels of fitness and endurance are astonishing. At the end, they didn’t even look tired. Leinster certainly did. The scoreboard can do that, of course, but that Vunipola try was a metaphor for the match.

The salutary truth is that Leinster were defiant to the last, and actually played very well collectively, and individually. Cian Healy and Tadhg Furlong were immense. Likewise James Ryan (19 carries and 19 tackles) and Jack Conan (18 and 25). The underused Jordan Larmour looked electric, and Rob Kearney had a fine game. They all put their bodies on the line, none more so than Sexton.

Leinster had 56 per cent possession and 50 per cent territory, but their possession-based game made little inroads into Saracens’ veritable brick wall of a defence, in which Brad Barritt made 28 tackles. For all their recycling, Leinster made only two line breaks to Saracens’ nine.

Even when Leinster were building a 10-0 lead, it always felt that Saracens were wining the collisions and generating quicker ball. In uncanny and uncomfortable echoes of that aforementioned Ireland-England game, Saracens had 49 dominant collisions to Leinster’s 19. As a result, they largely bossed the gain line, where they had a 48 per cent success rate with their carries, to Leinster’s 24 per cent.

Though there were defining moments, it was impossible to dispute that the bigger and better side had won

Unlike in last season’s quarter-final, when Leinster weren’t flattered by their 30-19 win and attacked more off McGrath that day, here it nearly all went through Sexton. In any event, that’s twice now English-infused sides have bullied Leinster/Ireland, and so there’s plenty for Joe Schmidt, Leo Cullen et al to mull over. Of some compensation for the former is that, quite probably, this Saracens team is better than England.

Leinster will also feel that nearly all the marginal calls, along with a few wrong ones, by Jérome Garcès and his French officials, went against them. But, though there were a host of defining moments, it was impossible to dispute that the bigger and better side had won.

Sarries’ bench, unsurprisingly, had more oomph, not least given both their replacement props, Richard Barrington and Koch, were forced on 30 minutes in.

Leinster’s bench looked thinner, and while Cullen maintained they would continue to develop from within, however productive their conveyor belt has been, it tends not to produce man mountains such as Will Skelton, Maro Itoje and Billy Vunipola.

“The way we want to play is to move those guys around. We have a team that wants to play at speed. We still have some powerful ball carriers and you can see with some of the chances we were creating to get over, but we looked dynamic in terms of some of our forward play in particular, in that 20/30-minute period of the first half. You know it’s genetics, really; you can really only do so much about it.”

1 Bryson DeChambeau trainer insists muscle gain is not down to steroids
2 Paul Stirling’s heart over head decision to play on for Ireland bears fruit
3 Sporting Cathedrals: Le Stadium - European fortress of the mighty Toulouse
4 Harding Park, named after a lousy US president who never stepped foot on it
5 Rory McIlroy hoping course-and-distance form will stand to him at Harding Park
Real news has value SUBSCRIBE