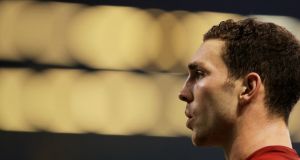 George North will not feature for Bath this weeked. Photograph: Getty Images

Rugby’s authorities have been heavily criticised for failing to issue any sanction over Northampton’s handling of the latest episode of concussion to have marred George North’s career.

Former Saracens captain Alistair Hargreaves says the failure to sanction Northampton for their handling of the injury is a “disgrace”.

It is the strongest condemnation yet of the decision by a joint Rugby Football Union and Premiership Rugby investigation not to charge Saints with misconduct for allowing North to resume playing after he appeared to have been knocked unconscious in a league match on December 3th.

Two months ago Hargreaves, Saracens’ 2015 Aviva Premiership-winning captain, announced his retirement from the game at the age of 30 after suffering five concussions in two years.

Reacting to the findings of the review, which acknowledged that North should not have been allowed to play on but declined to open disciplinary proceedings as Northampton were not wilfully negligent, Hargreaves voiced his anger.

“Decision made by CMRG is a disgrace. Is this what we call player welfare EnglandRugby premrugby? What a depressing day for rugby,” the South Africa-born lock said on Twitter.

Replays appeared to show that North had been knocked out following an aerial collision with Leicester’s Adam Thompstone at Welford Road, yet he passed a head injury assessment (HIA) and resumed playing.

Saints’ defence is that not all replay angles of the incident were available at the time of assessment and that the Wales international denied any loss of consciousness, had immediate recall of events and stayed motionless due to concerns for his neck pain.

The Rugby Players Association reacted to the verdict of the investigation by describing the ”breakdown in procedure” that enabled North’s return to play as a ”significant failing”, adding that it would have preferred disciplinary action to have been taken.

”While we feel that sanctions would have sent a clear message about the gravity of concussion mismanagement, we welcome the recommendations outlined in the report,” an RPA statement read.

Brain injury charity Headway has expressed its alarm at the Concussion Management Review Group’s findings by questioning whether there needs to be an overhaul of the system in place to assess concussion.

“We are concerned with these findings,” Headway chief executive Peter McCabe said.

“Serious questions have to be asked regarding the protocols: Are they fit for purpose and are they being properly enforced?

“This incident sends out a confusing message around the issue of concussion, particularly for children who follow the example of famous players and favourite clubs.”

Ian Christian, an expert sports injury lawyer at Irwin Mitchell who worked with the Rugby Players Association in developing its concussion protocols, is also dismayed by the outcome of the review.

“It’s hugely disappointing to see that Northampton have not been held to account for the handling of George North’s injury as it was a chance to make a statement and remind clubs, players and fans how serious an issue it is,” Christian said.

“The findings and lack of punishment feel like a backwards step with the experts stating that Northampton could and should have done more to prevent North returning to the playing field.”

North had a six-month spell out of the game in 2015 following a spate of four blows to the head in five months, two of which were incurred in a Six Nations match against England.

Director of rugby Jim Mallinder revealed earlier this week that the 24-year-old British and Irish Lions wing was in contention to start, but he has been omitted as crisis club Saints seek the victory that will ease the pressure heading into Christmas.

“George North has both trained with the squad and undergone a specialist review this week,” a statement released by Northampton read.

“All parties have agreed that North continue with a full training schedule with the rest of the club’s players to ensure he is fully prepared for first team action.”