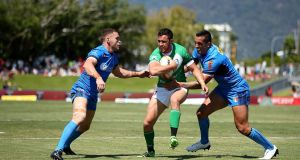 Ireland captain Liam Finn set his sights on a World Cup quarter-final clash with England after helping his side to a stunning 36-12 win over Italy.

The Wolfhounds overcame sweltering conditions in Cairns to run in six tries, two of them from winger Liam Kay, to brush aside an Italian side that were fancied to reach the knockout stages.

Ireland, the only home nation to emerge victorious from the first round of fixtures, now take on Papua New Guinea in Port Moresby next Sunday, hoping to halt a side that hammered Wales 50-6 in their opening game.

The Azzurri suffered a blow before kick-off with the withdrawal through injury of former Hull KR skipper Terry Campese, while scrum-half Jack Johns went off with an arm injury three minutes into the second half and they were 20-0 behind before registering their first points.

“It was a very good performance,” said Finn, who kicked six goals from seven attempts. “I was really proud of everyone involved. Our forwards were massive.

“We trained really well in the two weeks leading up to it and I knew we were going to put in a performance, but we didn’t know what Italy were going to turn up with.”

The game was twice held up for drinks breaks but there was no stopping the Irish, who wrapped up an impressive victory with second-half tries from St Helens forwards Kyle Amor and Louie McCarthy-Scarsbrook and Canterbury Bulldogs centre Michael Morgan.

“The conditions were ridiculous really,” Finn said. “I don’t know whose idea it was to kick off at 2pm.

“They were as tough as you can get, although saying that we go to Port Moresby next week so maybe that will be tougher. I hope that’s good preparation.

“We went down to Brisbane for the launch and the temperature was nothing like it is up here. I don’t think the drinks breaks made that much difference. There were enough stoppages in the game to have water.”

Ireland will now hope to build on their opening victory when they take on the Kumuls in front of their passionate fans in Port Moresby.

“I watched the Wales game and it was non-stop physical,” Finn said. “If they get a lead next week then they will be hard to run down, so we need to start with that same mentality this weekend, get a foothold in the game and see if we can expose them by taking them a bit further than Wales did.”