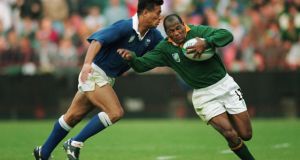 But something else has followed this great Springboks team around: tragedy. Mandela’s famous line when visiting the camp mid-tournament was: “Where’s Chester?”

The team’s only non-white player died of a heart attack last week.

Chester Williams, who was 49, is the fifth member of the ’95 champions to pass away after coach Kitch Christie, flanker Ruben Kruger (in 2010 from brain cancer aged just 39), scrumhalf Joost van der Westhuizen and James Small.

Small, who famously marked the late Jonah Lomu in the final, died just two months ago, also from a heart attack.

It’s also extremely unusual. The marvellously talented Van der Weisthuizen and Tinus Linee, who toured with the Springboks in 1994, both succumbed to motor neuron disease, in 2017 and 2014.

Another Springbok from this era, Wium Basson, died due to liver cancer in 2001 aged just 25.

André Venter, the 66-times capped flanker between 1996 and 2001, has been a paraplegic since 2006 after being struck down with a degenerative syndrome of the central nervous system known as transverse myelitis.

This question has been asked before and, following Williams’s passing, will be raised again: can it be a coincidence that so many professional rugby players, playing in and around the same period of South African rugby, have all suffered degenerative diseases?

The looming World Cup is already shaping into the ultimate tournament for punishment and injury.

The All Blacks are willing to carry former world player of the year Brodie Retallick until his shoulder heals before the quarter or semi-finals. England are taking a similar chance with Mako Vunipola – who tore his hamstring off the bone in Saracens’ Champions Cup final victory over Leinster last May – after he further damaged the tendon against Ireland in August.

Jack Nowell, like Joey Carbery, is not expected to be fully fit come the opening game.

These relatively minor enough concerns coincide with Sam Warburton’s warning in his autobiography about the state of the game, namely the overly physical nature of training. “If something isn’t done soon, then a professional player will die during a game, in front of the TV cameras, and only then will people demand that steps must be taken. It will be reaction rather than anticipation.”

This seems unending, with Warren Gatland, on Saturday at the Aviva stadium, sending out a fresh warning to rulemakers around the tackle area: “The ironic thing about World Rugby is they are trying to keep the tackle [height] down, but most of the concussions are from tacklers going low and making contact with hips and knees.”

Mapimpi stands up to violence against women

Apologies for such a grim column this week, but the scourge of gender-based violence in South Africa has been exposed to a global audience on the eve of the Rugby World Cup. When Makazole Mapimpi scored his hat-trick against Japan on Friday night, the Springbok flyer used the moment to pay tribute to Uyinene Mrwetyana.

Mrwetyana, a 19-year-old Cape Town student, was raped and murdered after allegedly being abducted at her local post office by an employee who had not revealed his previous criminal record before being hired.

“As a nation, we are abruptly woken up from our slumber when these heinous crimes are committed,” said South Africa’s minister of higher education Buti Manamela. “We are outraged by the brutality and wonder why these things are happening in South Africa.”

When Mapimpi scored his first try, Japanese TV cut the replay showing him signal to his wrist and the words “RIP Nene”. However, it was impossible to hide the message after his second try as the 29-year-old walked down the lens of the camera.

History repeatedly shows that it takes tremendous courage to protest in the international sporting arena as it tends to upset the coach and teammates, with the potential cost being your livelihood.

“I remember sitting in the old West Stand. I was with my dad and my dad’s uncle. We had to stand on the old wooden, rickety seats just to see down into the corner. I remember the entire row just flipped and broke but no one gave a shit because Gordon Hamilton had just scored.” – Rory Best remembers the 1991 World Cup quarter-final at Lansdowne road