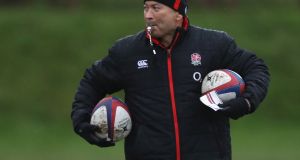 Rarely has an England rugby squad enjoyed a briefer new year honeymoon than they have been permitted in 2018. Not that Eddie Jones cared about the heavy rain lashing the Brighton seafront; if anything it was sent from the managerial heavens.

The England coach reckons the next 12 arduous months will effectively determine whether England win next year’s World Cup in Japan and his players have already taken delivery of the message.

If the drowned rats trudging back through the Grand Hotel foyer are expecting an easy life they are going to be sorely disappointed. Ditto those outside the camp wondering if Jones has mislaid his selectorial marbles. While he is not deaf to the clamour of support for, among others, Don Armand, Dan Robson and Danny Cipriani, he is not currently minded to change tack.

Instead, as he talked up the no-nonsense qualities of the uncapped Newcastle flanker Gary Graham and the potential of Bath’s loosehead prop Beno Obano, Jones’s priorities grew ever clearer. He is not attracted to players who flicker in or out of games or even those who look good at club level every week. Instead he is specifically hunting natural-born Test animals who, in his book, are an entirely different species.

If there was a Test trial scheduled this week involving a Probables XV against a Possibles side selected by public vote there is every chance Armand, Robson, Cipriani and others not presently in the training squad – Luke Cowan-Dickie, George Kruis, Mark Wilson, Matt Kvesic, Alex Lozowski, Alex Lewington, a fit Nick Schonert – would show up well.

Previous regimes would probably have picked them. Jones, though, is thinking only of the white heat of Test rugby: he wants a more dynamic presence over the ball than Armand, a more robust defender than Cipriani and a scrumhalf with more sound basic kicking and passing skills, so it is said, than Robson.

Hence the following discussion with the in-form Cipriani on Christmas Eve. “I think we ended up talking about academy awards. He was telling me about some supporting actor who won a main actor award. My argument with him is that if George Ford and Owen Farrell were out injured, then there’s a possibility we’d bring him in the squad as a main No10, but I wouldn’t have him in the squad as a supporting No10. I have ongoing discussions with all players: whether they like these discussions or not I don’t know and I don’t really care.”

The counterargument is that if Cipriani is not attending camp and the management are not much swayed by club games how can he advance his case? The answer is not easily. Jones even let slip that his current “apprentice” outhalf Marcus Smith was his preferred 2019 World Cup option. “I see him [Smith] as an important investment for English rugby,” Jones said. “We’d ideally like to get him right for the World Cup because then he fills a role as a third stand-off for us.”

It is Jones’s belief, furthermore, that international rugby continues to move steadily away from how it looked only a few years ago. “The game attack-wise has become really interesting. Thirty years ago eight forwards went to every breakdown. Ten years ago you had four. Three years ago you had three. Now you want to win a breakdown, if you can, with a ball-carrier plus one. That’s a whole new skill. Being more effective at the breakdown is a big area for us to improve. That then gives us [more] options to attack off nine, 10 or 12. Defence is also going to evolve. Sides have defended a certain way and I think that is going to change with some law interpretation changes. We want to be at the head of that queue.”

Viewed in that context the selection of fit, hard-headed backrowers such as the unheralded Graham, the son of the former Scotland prop George Graham, start to make more sense. “He has done really well at the camp,” Jones said. “He reminds me a bit of Chris Robshaw. he is not an out and out seven [but] he is a good tough boy, he has got a nice demeanour about him, he’s hungry and very impressive.” Every other backrower will sense the veiled warning.

Jones, similarly, has not picked Obano solely for his musical ability – “He’s a good rap singer, he’s quite entertaining” – but to ginger up everyone else: “2018 is when you win or lose a World Cup: your planning, preparation, developing a team that is tough enough, resilient enough, adaptable enough to win a World Cup.” – Guardian