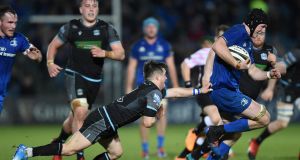 Leinster’s Ryan Baird evades a tackle from George Horne of Glasgow on his way to scoring a try. Photograph: Tommy Grealy/Inpho

A hat-trick for Ryan Baird. Remember the name.

This makes it 21 Leinster wins on the trot dating back to last year’s Champions Cup final. There’s an inevitability to them this season, a blue wave rolling over every opponent, and this night in Ballsbridge was no different.

That’s not to say it wasn’t worth witnessing the rise of two 20 year olds at lock and outhalf; Baird and Harry Byrne being the latest pair from St Michael’s College to glide into the professional ranks.

Baird’s fantastic all round display showed just why Andy Farrell included him in Ireland’s pre-Six Nations training camp. Now it becomes about finding a role for him when Saracens come to Dublin on April 4th. He looks ready.

The mix and matching of 51 players cannot stall the long strides of Leo Cullen’s men towards a third successive Pro 14 title. Seemingly, the path to a perfect year is only under threat from the English giants mugging them in the Champions Cup quarter-final or the very real possibility of mass cancellations should the coronavirus grip the island.

Whatever the future holds, Leinster are soaring at the moment.

Glasgow, the last club to win in Dublin, 10 long months ago, are supposed to be genuine rivals but Dave Rennie’s side barely landed a blow.

What made the game interesting was the young Leinster core maturing before our eyes. One man in particular is on the cusp of uprooting Leinster’s tallest tree Devin Toner.

The only concern about Baird, and it is minor, is his height (6’4” in programme but 6’6” on Wikipedia). Not many six foot four inch second rows scale the highest peaks of international rugby. Maybe he’s still growing. Either way, Baird might prove the exception that proves the rule.

Those seemingly vital inches, that would put him alongside fellow St Michael’s prodigy James Ryan, were hardly needed when dipping under brittle Glasgow resistance for Leinster’s opening try with three minutes on the clock. It helped that Seán Cronin and Josh Murphy had a shoulder behind each of his hips.

The latest victory in this potentially invincible campaign looked certain when Dave Kearney - who also snatched a hat-trick - crossed for the second try in the 12th minute.

Byrne clipped the first conversion before mimicking Johnny Sexton’s Twickenham yips with the second. He’s far from the finished article but there’s similar excitement about the younger Byrne brother - earlier in the day Ross could be found training with Ireland in Donnybrook - as there is about Baird.

If this was Byrne’s opportunity to skip past Ciarán Frawley in the outhalf pecking order then he took it. Defensively and tactically he’s streets ahead of other Irish 10s when they were his age, with a massive right peg also in the arsenal.

Glasgow briefly silenced the RDS crowd on 25 minutes when Tommy Seymour ran over unopposed after a clever reverse pass by scrumhalf George Horne on second phase off a solid scrum. Another older brother, Peter Horne, slotted the conversion.

The Leinster response was instantaneous - Scott Fardy’s offload on the short side giving James Lowe an easy stroll for try number three.

Fardy claimed the bonus point score - once again rumbling through Glasgow’s weak goal line tackles - on the stroke of half-time.

This cannot be filed away as a flawless night. The locals had barely returned from food and drink raids when Kyle Steyn sprinted down the left wing and evaded Hugo Keenan.

That focused the minds. The genesis of Lowe’s second try was a powerful carry and lovely side step by Baird. Jimmy O’Brien won’t thank Byrne for the hospital pass that allowed Niko Matawalu to land a heavy shot but the young centre swallowed contact before offloading for Keenan as Joe Tomane put the Kiwi flyer in open grass.

The best sight of all though was Baird galloping clear from 25 metres. A serious teenage talent, his third dive over the whitewash, when Max Deegan was held inches shy, announced his arrival in the men’s game.

When you’ve this much energy and skill, height really doesn’t matter.