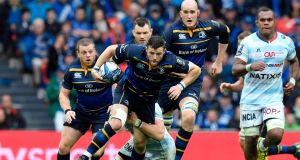 Robbie Henshaw has been ruled out of Leinster’s Guinness Pro14 semi-final against Munster next Saturday at the RDS due to the knee injury he sustained in their European Champions Cup final win over Racing 92 in Bilbao on Saturday.

The extent of his injury will become clearer pending further tests this week, but given the time, Henhsaw’s participation in Ireland’s tour of Australia must also be in doubt.

The other major Leinster injury doubts for next Saturday’s sellout semi-final are the captain and vice-captain, Isa Nacewa and Johnny Sexton. Nacewa has also gone for scans on the calf injury he sustained in the European final, and he will be assessed further this week ahead of selection at the weekend.

Sexton’s groin strain, which he sustained when miscueing a penalty from halfway, did not prevent him from attempting two more penalties before then handing the kicking duties over to Nacewa and his injury has not required a scan.

Following their celebrations on Saturday and victory homecoming in Donnybrook, the squad re-assembled for some video reviewing today before returning to the training pitch tomorrow as they seek a first European Cup-Pro14 double, having been denied by Munster and the Ospreys in the 2011 and 2012 League finals a week after conquering European when beating Northampton and Ulster.