Leinster earn their place among Europe’s finest after outmuscling Racing 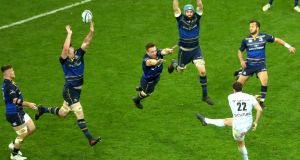 Like all great teams – and Leinster can now be bracketed thus – it can’t always be all-singing and all-dancing. Like all great teams, Leinster found a way, ultimately outmuscling a monstrous team and keeping their nerve to move alongside Toulouse as European royalty.

It may be the least memorable of their four final successes, but that will only have made it more special, as could be judged by their wild on-field celebrations alone. They earned this one, and how.

Everything conspired against them, not least Racing’s huge defence and the rain, as Leinster emulated Ulster (1999), Toulouse (2005) and Saracens (2016) in winning a tryless final, also emulating the latter as the only team to win nine matches out of nine. Berets off to Racing, as plenty conspired against them, who had to play 77 minutes with a third-choice outhalf who probably hadn’t run with the team much all week after losing Dan Carter in the build-up and Pat Lambie in the third minute.

Leinster also had to overcome Wayne Barnes – whose whistle and commentary dominated proceedings – and his team of officials. They allowed Racing to live offside until the telling last two penalties, declined to sinbin Leone Nakarawa for the clearest one-handed deliberate knock-on you’ll ever see and allowed the Parisians to fall on the wrong side of the ball and take players out.

So Leinster made what they could out of mostly slow, greasy possession, with Dan Leavy (20 carries and 17 tackles – how does he continually do this?) and James Ryan providing the benchmark as they do, and the likes of Devin Toner, Jordi Murphy and Scott Fardy mucking in, while the centres Robbie Henshaw and especially Garry Ringrose, grew more influential, with Rob Kearney having another strong game at the back.

Racing came into their second European Cup final in three seasons having won 16 of their last 19 games. Coupled with the forecast rain, this unsurprisingly made for a tight, chess-like encounter – with a combined 55 kicks out of hand – albeit one with ferocious physicality. Leinster were always an unappealing 10 or 11-point favourites.

“The utterances I’d heard from the bookies all week were crazy,” said Sean Cronin, who capped off a redemptory second half to the season with another hugely industrious game. “I don’t know what the spread was, 10 [points]? Come on! They’ve internationals all over their team.

“We knew that they were going to be in the game for 80 minutes. It’s so pleasing that we could get over the line. We played well and performed all year. If we’d lost today it would have been a killer for us.”

Indeed, that fear of being denied at the last after being the best team in the competition was palpable, all the more so after a five-year hiatus since their third triumph.

“It’s six years since I’ve been in a final and, God, I mightn’t be around in six years’ time again,” admitted Cronin. “That sort of stuff goes through your mind during the week and you’re just hoping you put in a performance on the day. Last year we lost in the semi-final, but to get into the final and the pressure that comes from that – it was about adapting to that.”

As a taut second half unfolded the notion that this final would be won by a moment of brilliance was replaced by a feeling that it would come down to a mistake.

Sure enough, Teddy Thomas’s decision to run back toward the touchline after Nakarawa had stolen a Leinster line-out proved fateful, albeit Jack Conan still had to tackle him into touch. Given a second shot, this time Ringrose trucked up Johnny Sexton’s flat pass from which Rémi Talès pushed up offside. Cue Isa Nacewa’s penalty to nudge Leinster in front for the first time in the 79th minute.

Conan admitted afterwards: “I potentially thought I was going to tackle him high because there was a lot of those kind of seat-belt tackles, and people got done for it. He tried to fend me off and I blocked him down and luckily got underneath his arm. It was legal and it was low but it was on the verge.

“That was the kind of moment that you hope won’t come your way, that you will lose the game for the lads, off the bench. I would have been absolutely miserable. I’m happy that I got that one right anyway.”

Conan also said that the ball was “greasy to the point where you couldn’t push those passes that you would in dry conditions. You couldn’t throw that five or 10-metre pass. It hampered our style and the way we like to play but, again, that doesn’t matter. We came out here and we did the job.”

That Leinster didn’t reproduce the same potency of previous games en route to the final showed another side to their character. “I think the Scarlets was our best performance of the year and this definitely wasn’t up there,” admitted Luke McGrath. “But finals can sometimes do that. I thought winning it this way, when we had to grind it out, was extra special.”

European Cups don’t come easy, and after their free-scoring run to the semi-finals last season, the memory of defeat to Clermont remained a powerful spur, compounded by losing the Pro12 semi-final to the Scarlets.

“We spoke about last year, how disappointing it was, not only in the Clermont game but against the Scarlets as well,” said McGrath. “It was a massive target, in-house. We spoke about putting that fourth star on the jersey and look, it’s incredible. It probably won’t sink in for another few weeks, but looking back, no one can take it away from us.”

1 Monica Seles: The warrior queen who could have been the best ever
2 Ferrari’s Charles Leclerc ‘will not take the knee’ before Austria GP
3 John Egan rescues a point for Sheffield United at Burnley
4 Serpentine stays on from the front to steal Epsom Derby for Aidan O’Brien
5 Séamus Power huffs and puffs as Wolff blows the door down in Detroit
Real news has value SUBSCRIBE