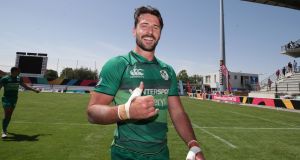 Harry McNulty’s tagline could be ‘a portrait of an artist as a rugby player,’ although he might choose to flip the two vocations in terms of pre-eminence and would possibly balk at such a grand statement.

His multimedia portfolio is nevertheless impressive, highpoints of which include standing 10 feet away while observing a male silverback gorilla in its natural habitat in Uganda to chronicling his experiences of dog-sledding on a glacier in Alaska, preserving the experiences photographically and with video footage. In August, coronavirus permitting, he will swim with humpback whales off Tonga.

His day job is as a longstanding and valued member of the Ireland Sevens rugby team but the current Covid-19 pandemic has shelved that aspect of his life for the time being. The next events in the Men’s Sevens World Series are deferred until September while the Olympic Rugby Sevens Repechage qualifier tournament in France in June is under threat.

The enforced rugby sabbatical has allowed McNulty to while away hours at his computer editing footage from his global travels; he is making good headway through the backlog. What initially started as a casual interest has mutated into a more professional and financially rewarding sideline.

He does some work for The Collaborations Agency, an Irish firm that includes amongst its sports content providers, Wexford hurler Lee Chin, jockey Bryan Cooper and former Kerry Gaelic footballer and Wexford manager Paul Galvin. The genesis of his interest was piqued several years ago on an Erasmus exchange at the University of Queensland in Brisbane while he was studying at UCD.

McNulty explained: “Basically I made a few friends who created videos and photos from trips that they undertook over weekends. They made them for themselves. I loved it. I picked up a GoPro (camera) and started doing it too. It became a passion. I have no problem sitting at a computer for six hours editing a video.”

He continued to pursue his new interest when returning to Ireland. His Sevens rugby teammates were initially disparaging but gradually recognised that McNulty had a flair and became more supportive but it was a stroke of serendipity that elevated a hobby into a something more substantial and lucrative.

McNulty said: “My aunt sent me a Facebook message, saying, ‘this job is perfect for you.’ It was a company (Royal Caribbean Cruise Line) advertising a position that would allow someone to travel the world and get paid to do it. There was nothing to it other than having to post on Instagram; no signing up, no friends having to vote for you. It was just up to you essentially. You just had to tag Royal Caribbean with a hashtag, ‘Shore Explorer.’” There were 37,000 entries.

“I came up with the concept of them meeting me before I met them so I spoke to the camera for 30 seconds and then it led into the 30-second video. I had applied for a competition two years previously and the winner actually did that; so I took that information and ran with it. My video was number one for two weeks and eventually made the Top 20.

“We (the Ireland Sevens team) were in Hong Kong (2019) trying to qualify for the World Sevens Series and at that point I was still in the Top 20 (videos). On the Wednesday before the tournament, I got an email asking if it would be possible to take a phone call. I had a mini-interview, then another, before receiving a phone call subsequently to tell me that I had won. It all happened so quickly at the end but it did throw up a conundrum.

McNulty waited until the Sunday night, a double celebration as Ireland duly qualified for the elite Sevens circuit by virtue of their triumph in Hong Kong but his news was initially greeted with incredulity. He laughed: “They didn’t believe me. They thought I was making it up because we had won Hong Kong.”

It was a three and a half week contract that took him round the world, roughly three days in each location, and he was paid £6,000 (€6,637) for his time. The remit, through photographs and video was to show what passengers could do on shore excursions at various destinations in which Royal Caribbean cruise liners docked.

“I went to Miami, the Bahamas, Alaska, Japan, Dubai, Norway and Portugal. I got to choose what I wanted to do in those places prior to going out. They had a list of activities that I had access to and organised everything, pretty much.

“In Miami I went to different areas like Little Havana. When I was in Alaska, I did a helicopter ride, dog-sledding on top of a glacier in the mountains and zip-lining through the woods. In Japan, the company hired a private chauffeur for two days because of the language barrier. In four days I visited shrines and temples, dressed as a samurai and took a class. I ending up putting a video together and it went down well.

“I was doing daily Instagram stories about what I getting up to, posting videos on their (Royal Caribbean) Instagram and on mine. I now have an agent for my content creations. It’s been going very well and I enjoy it. This whole isolation period, while others are getting cabin fever, I’m kind of excited because I get to do a lot of work, editing and writing, stuff that I have had to put on the back burner because of the Sevens.”

The 27-year-old’s enjoyment of travel stemmed from his childhood. He was born in Bahrain, where his parents met, his mum, Sandra an air hostess on the King of Bahrain’s royal plane, his father, Aidan working in finance while squeezing in some time to play for the local rugby club.

McNulty was just three months old when the family – he is the eldest of four children, Ella, Sean, who plays rugby with the Boston Freejacks in the MLR in America, and Ciara are his siblings – moved to London, where they stayed for three years before relocating to New York when his father got a job on Wall Street.

“We were there for 10 years, lived about 40 minutes outside the city. I grew up playing all sports, baseball, soccer, swimming and tennis but ice hockey would have been my number one. I still retain a huge interest. ”

The nomadic lifestyle continued when the family returned to live in Bahrain. McNulty was 14 at the time but after six months he persuaded his parents to send him to Ireland to board at Rockwell College. It wasn’t until fifth year that he made the firsts, a team that lost a Munster Schools Cup final but the following year, 2011, he was an integral part of the Rockwell side that beat Pres Cork in the decider.

He played underage representative rugby with Munster at Under-18s, 19s and 20s, went to college in DIT in Dublin but switched to the University of Limerick, joining the likes of Jack O’Donoghue and future Irish Sevens teammate Greg O’Shea is that year’s intake to the Munster academy. He was there for two years before that chapter ended and he enrolled in UCD, from where he graduated with a degree in Food Science.

It was an outside agency, of sorts - his mother Sandra - that helped to direct him towards Sevens rugby. In 2015 the IRFU sent out a newsletter announcing that they were setting up a Sevens programme and that there would be a series of trials around the country. McNulty explained: “My mum basically put me in.

“I did an open day trial out at Santry on the running track, involving a CMJ (counter movement jump), a 10 and 20 metre sprint test and a Yo-Yo fitness test. That was the baseline testing throughout the whole country. Foster Horan and I tested side by side, so it is cool that we are playing together.”

McNulty negotiated his way through a series of trials in a single day’s games at Lansdowne Road involving academy and IQ (Irish qualified) players; he’s been in the programme ever since, missing just a single tournament in the last five years. A centre and wing in 15s, he’s a prop in the abbreviated code.

He argues that Sevens is a reputable pathway for young players to develop core skills before potentially returning to the 15-a-side game. “Adam Byrne, Nick Timoney, Alex Wootton, Dan Goggin, Barry Daly, Tom Daly, Robert Baloucoune and Will Connors prove that Sevens can be beneficial to the development of players.

“You have to be fit enough not only to perform your tasks on the pitch but literally to be able to speak when you’re blowing. Communication is vital.”

He marvels at some of the young players like Liam Turner who have been able to adapt straightway when thrown in at the elite level in Sevens, arguing that he’s been fortunate that his acclimatisation was more graduated and gentler as Ireland climbed from a European division three team to their current status.

McNulty is happy to be considered a Sevens ‘lifer.’ “I don’t have a burning desire to play 15s. If I was to do it, it would probably be if I had an opportunity to play with my brother (Sean) in the MLR. I have a lot of really good friends in that league. I would like to go for the rugby but as much for a cultural living experience as well. I don’t see myself trying to get a Leinster or a Munster contract. I love my Sevens and can’t see me switching but you never know what life throws at you.”

McNulty’s got a number of ideas about his post rugby career, one of which is working for an NGO in wildlife conservation; there are one or two other thoughts as yet unformed fully. For now he can manage the overlap, whenever rugby resumes.