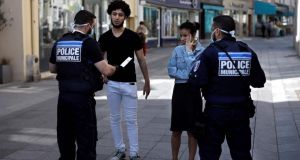 Police carry out a check on people without face masks in Sceaux, south of Paris, on Wednesday. Photograph: Thomas Coex/AFP via Getty Images

Amid the panic, governments worldwide are responding to Covid-19 by instituting measures that limit civil liberties. Irish politicians recently passed two Bills granting the Government expanded powers, including to prohibit movement and assembly. As of yesterday the gardaí have the power to tell people to return to their home or face prosecution.

Our intuitions about which new limits on liberty are reasonable and just sacrifices to make in the interest of our fellow humans depend on a range of factors, from trust in government and technology to our political, moral and economic values.

European governments are willing to take dramatic steps to combat the spread of the virus: Austria mandated wearing a government-supplied face mask when in public, and France’s lockdown limits people to one hour outside per day within one kilometre of their home.

Citizens from countries accustomed to fewer liberties may even, in the interest of public health, support the loss of privacy – for example, China’s WeChat and Alipay mini-apps that generate QR codes necessary for individuals to access buildings while reporting private data to authorities; or Singapore’s TraceTogether app that uses Bluetooth to consistently ping nearby phones so the authorities can access a log of everyone with whom a user has come in contact. Would Germans accept such an app?

While a degree of trust in authority is necessary for society to function and allow public-health officials to combat the spread of infectious disease, a healthy scepticism is also necessary for maintaining free and fair societies. We are all panicking in this pandemic and as a result vulnerable to governments exploiting the moment to permanently increase their power while enshrining new laws and technologies limiting our civil liberties.

In chaos, it is even more important to have a framework for evaluating new developments.

We can examine whether new measures are trustworthy or suspect by evaluating whether the justifications for the measure reflect valid motivations or are Machiavellian pretexts.

There are several tests one can use to evaluate the trustworthiness of governments’ justifications for enacting measures limiting civil liberties.

1: False dilemma test. Would a more attractive or less controversial choice satisfy the justification? One should always be suspicious of claims that there are only two options, yet the pretext is blatant when a speaker justifies taking one measure because the only alternative was worse but retains the initial choice when faced with a third option. The US department of justice is seeking to deny people constitutionally guaranteed due process, arguing that courts cannot hear cases during the Covid-19 outbreak, because the options are either risking public health by continuing with in-person courts or cancelling all proceedings, even though courts around the world are taking proceedings online.

2: Selective enforcement test. Are the measures enforced only in certain areas or to target specific individuals? One might call this the hypocrisy test. The president of the European Federation of Journalists warned “Covid-19 measures must not be used as a pretext to censor journalists,” reflecting the danger that the laws against “fake news” emerging around Asia could be abused to target journalists and individuals the regimes considered a threat.

3: Unobtaining outcome test. Does the measure fail to produce the promised outcome? Iran’s app that promised to detect coronavirus infection but instead reported users’ personal data and location to the government is a clear example of a justification that does not yield the result it promises. Other cases are not as clear: do the location-tracking apps that Israel, Iran and China launched in the name of tracing the spread of infection actually help?

Where it is difficult to determine whether the government is offering a false dilemma, selectively enforcing a measure or promising a result they cannot provide, the fourth test may reveal the motivations.

4: Auxiliary information and plausible motive test. Does any other information help analyse the situation, or is there another factor more likely to be motivating the speaker? For several years, President Viktor Orbán has been gradually undermining Hungary’s democracy, which suggests that this week’s emergency law allowing him to rule by decree indefinitely is exploiting the current crisis to accomplish a pre-existing goal. The fact that the FBI’s fitness app tracks users’ location and the wifi networks they use indicate that exercise is a guise for data collection.

Likewise, China had been struggling to establish the controversial social credit system before the Covid-19 outbreak and is taking the crisis as an opportunity to ramp up the social credit blacklist and normalise such rankings through the previously mentioned QR code mini-apps. When a measure so clearly serves an ulterior purpose, the audience should be alert to possible pretexts.

Ireland’s new Bills are valid for a limited timeframe, but other countries are introducing potentially permanent measures and technologies. It is important to make sure we do not permanently sacrifice future liberties in the current panic. These four tests offer a way to hold our leaders accountable to ensure that they do not use the pandemic as a pretext for seizing power at the expense of personal civil liberties.

1 Taoiseach says Government to weigh benefits of visitor restrictions when planning lockdown exit
2 BOI customers to be charged twice with bank fees on New Year’s Eve
3 Operator rejects claims by Dr Tony Holohan that car parks are full
4 Irish designer of Oxford vaccine : ‘I’ve never worked so hard in my life’
5 Somebody needs to explain sovereignty to Johnson before it is too late
Real news has value SUBSCRIBE