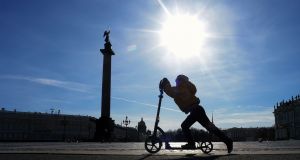 A boy rides a scooter on the deserted Dvortsovaya Square in downtown St Petersburg on Wednesday, during the lockdown in Russia to stop the spread of Covid-19. Photograph: Olga Maltseva/AFP via Getty Images

China has closed its land border with Russia, as the country where the coronavirus outbreak began tries to stop infected people arriving from its northern neighbour, where the number of cases is still rising sharply.

Russia reported a record one-day increase on Wednesday of 1,175 new cases of Covid-19. Officials say 8,672 people are now known to have been infected in the country of 140 million, 63 of whom have died.

Russia’s consulate general in the northern Chinese city of Harbin announced on Wednesday that Beijing was closing the crossing between the towns of Zabaikalsk and Manzhouli, which was the last operating passenger checkpoint on the entire 4,300km border. Cargo traffic would still be allowed through, diplomats said.

Beijing told Moscow a day earlier that it was shutting down the passenger crossing between Suifenhe in the Chinese province of Heilongjiang and Pogranichny in Russia’s far-eastern Primorye region to halt an influx of infected travellers.

Russian state media quoted Heilongjiang officials as saying that 45 Chinese nationals with coronavirus symptoms returned to their homeland earlier this week via that checkpoint, along with 86 carriers of Covid-19 who did not show any symptoms.

They are thought to have flown from Moscow to Vladivostok and then continued by bus and car to the border, after Russia banned all international flights late last month; Moscow accounts for about two-thirds of Russia’s Covid-19 cases.

Russia closed several checkpoints on its side of the frontier with China in late January, as the coronavirus outbreak exploded in the city of Wuhan.

The city of 11 million people was released from more than two months of lockdown this week, but attention in China is now shifting to the danger posed by “imported” cases involving Chinese nationals returning home from abroad.

Suifenhe on the Russia border went into lockdown on Wednesday, and locals’ movements will now be restricted and closely monitored.

“While the whole country is celebrating the unlocking of Wuhan, few noticed that Heilongjiang is under enormous pressure dealing with infections coming over the border,” Reuters quoted a user of the Weibo social media platform as saying.

“Suifenhe is a small city without any high-level hospitals, how can it handle the huge influx of patients?”

Russian president Vladimir Putin addressed his nation on Wednesday to announce new bonuses for medics and additional help for businesses, which fear bankruptcy due to a current halt to non-essential work and the predicted economic fallout from the pandemic.

At a briefing with regional governors, some of whom have mooted plans to seal off their provinces from the rest of Russia, Mr Putin said: “We must not stop the economy or halt transport, cargo or passenger links between regions . . . We should understand what damage, what destructive consequences, that could lead to.”