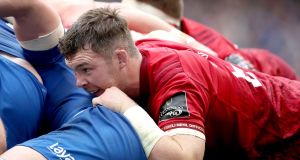 Munster’s Peter O’Mahony in action during the Guinness Pro 14 game against Leinster at the Aviva Stadium. Photograph: Dan Sheridan/Inpho

There are plenty of former rugby players working in the media nowadays. The Irish Times columnist Gordon D’Arcy recently incensed the Sunday Times rugby writer Stephen Jones over Seán O’Brien’s criticism of the Lions, the Luke Fitzgerald podcast for the Irish Independent got into a cringy slagging match with Paul Kimmage, and now Reggie Corrigan has sparked the ire from Munster skipper Peter O’Mahony on TG4.

Corrigan and Marcus Horan are attempting to do the job of immediate post-match interviews that take journalists years to come even close to perfecting – see Evanne Ní Chuilinn and Michael Conlan in Rio or Sinead Kissane and Eddie O’Sullivan at the 2007 World Cup.

There are other ways to go. Like the drum-beating jingoistic approach embraced ad nauseam by Sky Sports. Or the straight bat. Play it cool and get out unscathed.

Of course, nobody is truly safe because in sport somebody is always losing. Even the highly experienced Tony O’Donoghue on RTÉ faced the unconcealed ire of Martin O’Neill in Tbilisi.

As a young man O’Mahony was a tough nut to crack. But the captaincy and added responsibility that comes with it, transformed the 28-year-old’s answers into valuable additions to the game’s narrative. So long as he doesn’t sense the ultimate insult.

Corrigan: “What do you think about the intensity from your team-mates out there? Was there enough in the game?”

Corrigan: “Did they give enough, do you think?”

O’Mahony: “What do you mean? You’re questioning my teammates?”

Corrigan: “No, I’m asking about the intensity that came from the team.

Did you feel that they were giving it as much as they could possibly give out there?”

O’Mahony makes brief eye contact, begins to say something then stares into the abyss.

Corrigan: “I’m not trying to catch you out here, Peter. I’m just genuinely asking the question if you felt that they maybe left something in the dressingroom, that there could have been more than they could have given?”

Corrigan: “Thanks Peter, appreciate it.”

Afterwards O’Mahony told journalists that he took “huge offence” from the question.

“I think it’s a silly question. Essentially he’s calling myself and my teammates out, saying we’re not trying hard enough or are we working hard enough or do we want it enough. I’m a very proud Munster man, I’m a very proud Irish man, and that’s questioning the core of everything we do at Munster and Irish rugby. Everything is based around work rate and your want to win, how relentless you can be.

“For someone to question that, I take huge offence to it.”