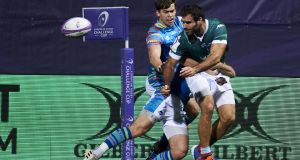 After Bayonne hosted Leicester Tigers in the European Challenge Cup, eight of the French club’s squad tested positive for Covid-19. The next two rounds of the Champions Cup and Challenge Cup have been called off. Photograph: Juan Manuel Serrano Arce/Getty Images

Rugby, like football and other sports at elite level around the world, faces an almost ongoing dilemma, namely to proceed or not to proceed.

There are, no doubt, some in the game who share the view of the Newcastle manager Steve Bruce that it is “morally wrong” for the Premier League to continue, and that a suspension of football is the only way to protect players from Covid-19 after his club was badly affected by the virus as a consequence of this coronavirus variant.

There is also an argument for implementing a so-called circuit breaker as this latest wave of the pandemic rips through society, not least when schools and so many other businesses and industries have had to shut down.

What makes rugby and other sports at an elite level so privileged? Might implementing a circuit breaker send out a message that we’re all in this together? Most of all, might it make society safer?

The enforced decision to temporarily suspend the two European club competitions has brought these questions to a head. There might well be a view outside of France that some Top 14 clubs have agitated for a suspension of the European tournaments – indeed it’s a view that might even be held within some French clubs who are traditionally keener on European competition than others.

In any event, the Top 14 were already devising plans to fill the next two weekends with full rounds of matches even before the EPCR temporarily suspended their two club competitions at 5.30pm yesterday.

It had even been mooted that the Premiership and Pro14 clubs complete the third and fourth rounds, and knock-out stages, without the French teams – all the more so if no formal directive comes from the French government. However, there was little or no appetite for driving such a schism between the European stakeholders, of which LNR are one, and revisiting the troubled waters of the past.

Nonetheless, the facts remain that after Bayonne hosted Leicester Tigers in the European Challenge Cup on December 19th eight of their squad tested positive for Covid-19.

Viewed in that light, it may well indeed be for the best that the next two rounds of the Champions Cup and Challenge Cup have been called off, a mini circuit breaker of sorts which will serve to cease cross-border traffic for the next fortnight, with the rescheduled Munster-Leinster game pencilled in for Saturday week. An initial week’s break, or easing down at any rate, for staff that have been working tirelessly without respite since the end of August may be no bad thing either.

However domestic matches at an elite level and the Six Nations are a different matter.

In completing the four rescheduled 2020 Six Nations games, the six countries concerned demonstrated they could operate safely in bio-secure bubbles. The same was true of the 16 matches in the Autumn Nations Cup, save for the outbreak of Covid-19 in the Fijian squad which resulted in their three pool games being cancelled.

Granted, the absence of supporters has seriously diminished the quality of matches on offer as well incurring huge financial losses, not least at international level. That being said there have still been some cracking matches across the board, be it interpro derbies, games in the Premiership and Top 14, and in the Champions Cup.

But that’s a separate argument and besides, even without fans, TV deals and sponsorship have ensured some revenue streams which in turn has maintained jobs that otherwise would have been lost. Rugby behind closed doors is a financial lifeline for the sport.

Of course, this view comes from a vested interest.

For sure, as Scotland’s first minister Nicola Sturgeon said yesterday in outlining why she believed the top tiers of Scottish football should continue, public health and safety comes first.

But as she also said, the exemptions for professional football, and elite sports people generally, were not just for their benefit. “We are trying to give people that bit of entertainment and normality.”

In the forthcoming days and weeks in January and February this has never been truer. No less than the All-Ireland championships, rugby has provided a semblance of normality as well as entertainment at a time when there has been precious little of either around.

As Sturgeon also said, if any sport did not adhere to the restrictions, then all bets are off. But rugby, and certainly Irish rugby, cannot be said to have done anything but abide by the protocols. The players and extended squad have been leading a monastic lifestyle, and this was especially so for the Irish squad when completing a six-match itinerary over a ten-week spell from the end of October through to early December.

They roomed on their own every evening and observed social distancing at tables of no more than three at meal times. Around 70-plus players and backroom staff were PCR tested every week and there was not one positive case in those ten weeks.

In addition to those six matches, the provinces have played 45 matches against opposition from five other countries or amongst themselves since rugby resumed toward the end of August, and the only game which has been called off for Covid-related reasons in any of the provinces was the Leinster-Munster game scheduled for December 26th. Even that postponement was the result of 16 false positives.

That is some achievement considering the different waves of the virus which have struck since then. It is not an easy lifestyle for, in addition to the restrictive regime they have adhered to, this has also called for co-operation from the families they have been living with throughout this time.

Some players who have been obliged to isolate themselves after being deemed close contacts of someone who tested positive have had to leave their families, book themselves into hotels and lock the door.

Ultimately, more than anything else, there has been no evidence that continuing to play elite level rugby has been a significant contributing factor towards the spread of the virus. If this was to change, then that’s a different matter.

The show should go on.