Munster run in seven tries as Dragons demolished in Cork 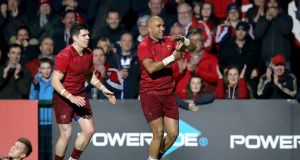 There were a few inevitable things about this encounter in Cork. Munster were always destined to win against a team that had lost its last 27 games on the road in this competition. And it was surely inevitable that Simon Zebo, back in action on Leeside for the first time since announcing his departure to France, would score.

Both of those things were achieved by the half hour mark with Zebo spinning out of a few tackles to squeeze over in the left corner and JJ Hanrahan’s conversion making it 14-3. The margin of victory was all that really remained to be decided after that.

Hanrahan, the villain last week in the loss away to Connacht when he missed a tackle for Tom Farrell’s clinching try, produced a superb performance to ensure that Rassie Erasmus enjoyed the perfect send-off.

Hanrahan was involved in several of Munster’s seven tries and crowned a wonderful display by landing all seven conversions, most of them from difficult angles.

It was the perfect way for Erasmus to end his term, although it took them 20 minutes to make their dominance show on the scoreboard.

Hanrahan created the opening to send centre Rory Scannell through for his second try of the season, sliding home despite the tackle of Dragons fullback Will Talbot-Davies.

Hanrahan landed the conversion from the left touchline, buy almost directly from the restart they conceded a penalty and Dragons outhalf Angus O’Brien punished them from 38 metres.

It was as much as Dragons mustered in terms of opening-half attacks, but Munster still only led 14-3 at the break despite being on top.

The second try came from a barn-storming break from South African flanker Chris Cloete on his debut. After knocking a couple of tacklers out of his way, he fed wide for Zebo to take it at speed and spun out of the tackles and score in the left corner.

It was the second week in a row he has scored since being dropped from the Irish squad and it was his 57th try in 126 appearances for Munster.

Hanrahan again negotiated the touchline conversion from the left to make it 14-3, an interval scoreline which did little to illustrate the gulf between the sides.

The gap actually was reduced two minutes after the restart when O’Brien landed another penalty, this time from 30 metres, to leave eight between the sides.

But that was as good as it got for Bernard Jackman’s men and Munster had the bonus point in the bag by the hour mark with a couple of excellent tries.

Jack O’Donoghue got the first of these after 48 minutes in a move down the right which twice involved Darren Sweetnam, with Robin Copeland taking it on in between, before the inrushing number eight finished the try in style.

Hanrahan again converted and then set up the bonus point try after 58 minutes with a wide pass after several unsuccessful forays which sent Sweetnam over to clinch the extra point.

Munster didn’t relent after that and despite both teams emptying their benches, the home side continued to dominate proceedings even if they ended up having to put centre Chris Farrell into number eight when O’Donoghue was injured.

It proved to be a memorable night as well for former Irish under-20 Sam Arnold who marked his first appearance of the season after injury in style.

He crossed for his first try for Munster after 64 minutes after being set up by man of the match Hanrahan.

Munster turned the screw in the closing stages, replacement hooker Kevin O’Byrne going over for his first try for the province after a good drive from a lineout.

And the rout was completed in the closing stages when Arnold got over for his second try of the night as Dragons capitulated.