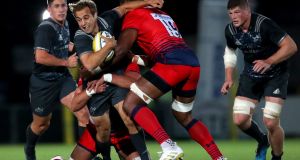 Munster’s James Hart in action during the pre-eason friendly against Worcester Warriors at the Sixways Stadium, Worcester. Photograph: James Crombie/Inpho

Munster’s director of rugby Rassie Erasmus has picked a youthful side for the province’s opening Guinness Pro14 fixture.

Unfortunately young flanker Conor Oliver will be out until the new year while Gerbrandt Grobler will see a specialist for an ankle problem.

The backline includes new signing, the Ulster-born centre Chris Farrell who joined from Grenoble, and a couple of fellow Irish underage internationals in wings, Darren Sweetnam and Alex Wootton, providing a real cutting edge to the three quarter line, provided they can be given a decent platform.

Academy loosehead prop Liam O’Connor has impressed sufficiently in pre-season to retain his place, albeit factoring in the injury to James Cronin (knee) and Dave Kilcoyne’s late return after summer duty with Ireland in the USA and Japan.

It’s great to see Mike Sherry return – he is on the bench – after prolonged spell through injury on the sideline, his last game way back in May of last year.

James Hart and Manchester-born prop Ciaran Park are set to make their competitive debuts for the province after joining from Racing 92 and Sale Sharks respectively.

Dubliner Ian McKinley is named at fullback for a visiting team that is hampered by an extensive injury list.