McFadden back in business and eager to make his presence felt 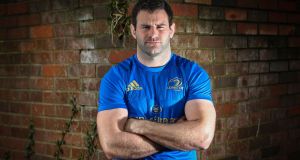 Fergus McFadden: “There are four friendlies before the start of the World Cup. That is time for Joe to try new guys.” Photograph: James Crombie/Inpho

It has been a painfully slow winter for Fergus McFadden, short days longer than they should have been.

In October Leinster coach Felipe Contepomi confirmed the Irish right wing had sustained a high-grade hamstring injury and would be kicking his heels until February.

For a player who had been part of Ireland’s 2018 Grand Slam-winning squad, McFadden’s season shrank before his eyes. His final game before injury was against Munster on October 6th and his return against the Southern Kings took his stretch away from competitive rugby to over four months.

Since Munster he has played twice this year, in February and again against the Cheetahs at the beginning of March – both of the matches a full 80 minutes. At 32-years-old McFadden understands the cost of such long layoffs.

But after a missed Six Nations Championship, Ulster are on the horizon in the Champions Cup quarter-finals after this week’s outing against Edinburgh. Making it to that match in Aviva Stadium might constitute some kind of a personal declaration.

McFadden’s understanding of how Joe Schmidt’s Ireland and the World Cup in Japan works is for him to first get on to the wing with Leinster in big games in big stadiums.

European matches have always been, as the Leinster players know, an access point to Ireland. In that McFadden is naturally circumspect. In the last 17 Irish games, Jacob Stockdale and Keith Earls have started all but four times.

“Listen, at the moment, all I’ve got in my mind is trying to get back in this Leinster team,” he says. “The way I looked at it, last year I hadn’t been in the squads for a while through reasons of injury and my form not being very good.

“At the moment, the priority is getting back in this Leinster side because it is just as tough as trying to get into the Irish side really.”

In that, the grim Irish performances and their sparking of an existential national crisis as well as an intemperate spate of social media gloating, have complicated the return of the players to club rugby.

Historically, the internationals come back in a wave as other players make way. But with Devin Toner, Josh van der Flier and Robbie Henshaw injured, Dan Leavy and Luke McGrath fit again and London Irish-bound Sean O’Brien sent back to Leinster from Ireland by Joe Schmidt, there are some badly bruised confidences. The status quo may be open to challenge.

Again healthy, the instinct to challenge would fall into McFadden’s suite of skills. An up tempo game and a fir- eater on the pitch, he goes looking if it’s not coming. But Jordan Larmour, Dave Kearney, Adam Byrne, Barry Daly, James Lowe and Joe Tomane, they all want to play too.

“The fact the lads coming back in with us now this week, you know, obviously there will be a little bit of prep for those guys,” he says. “But the game that is there this week is Edinburgh, this is all the group are thinking about. An all-Irish quarter final in the Aviva is going to be an amazing occasion.

“But we are certainly not going ‘the guys are going to come back. They are just going to get their spots’. Stuart [Lancaster] has pointed out to us that if guys are playing well in this block it will stand to them in terms of selection. So we are fighting for places.”

He believes that Schmidt is the coach to iron out what it is ailing Ireland. The O’Brien cameo of taking to the stage against England, Scotland and Italy and then on the naughty step for France signals a determination by Schmidt to be as unforgiving as he needs to be to get the team to function again.

In that there is light for players like McFadden. The imperative is to force Schmidt into doubting what he has available and show him how useful he can be, if not in a starting 15 then in a 31-man World Cup squad.

“There is no better coach to get some of the stuff they got wrong, get it right,” he says. “There are four friendlies before the start of the World Cup. That is time for Joe to try new guys.”

There it is right there, the glimmer of ambition and a flicker of hope, the cage fighter coming out.

1 World Rugby study advises removal of reset scrums to reduce Covid-19 risk
2 Sideline Cut: Vignette shows why Bird is the true shark in The Last Dance
3 Ken Early: Liverpool fans, Bamber Gascoigne and a close shave in Istanbul
4 Coming fourth in the Olympics didn’t change this fearless quartet, time did
5 As news gets better, can the pull of The Field be resisted?
Real news has value SUBSCRIBE