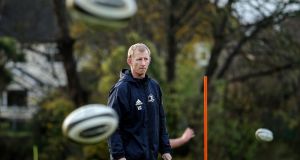 Leo Cullen rings changes with an eye on the back-to-back European games with Northampton from next weekend. Photograph: Inpho

The new English Rugby Football Union director of performance, Conor O’Shea, name checked Leinster this week as having one of the most envied systems in world rugby for producing top players.

The former Ireland fullback likened Leinster’s set-up to Saracens, now considered the best in the Premiership.

O’Shea was talking about the number of international players Leinster consistently produced but it is in weeks like this that the admired player conveyor belt is more sternly tested.

Clearly with an eye on the back-to-back European games with Northampton from next weekend, coach Leo Cullen has dipped deep into the squad that has not let him down once this season for a more than challenging trip to Glasgow.

It is an entirely changed Leinster team from last week against last season’s beaten Pro 14 finalists, who laced their side with some heavy hitters, not least of all lock Jonny Gray who is in line to make his first appearance of the season.

But like Cullen coach Dave Rennie has made many changes from last week, nine in all, with Gray partnering international Tim Swinson, a serious secondrow challenge for captain Ross Molony and Devin Toner.

As a result of Gray’s return Rob Harley shifts from the secondrow to the openside and lines up alongside Chris Fusaro and Ryan Wilson in a backrow containing 548 caps, enough to catch the attention of Leinster’s Josh Murphy, Will Connors and Caelan Doris.

Glasgow have also proven finishers Tommy Seymour and the flying Fijian Niko Matawalu on the wings. But Leinster players such halfbacks Ross Byrne and Jamison Gibson-Park, now an Irish resident, are also playing for the attention of Andy Farrell and with Fergus McFadden on the bench returning from an elbow injury, it’s more than a routine Pro 14 match for several of the players. Adam Byrne, already capped is another.

The 4G synthetic pitch at Scotstoun will give the home side an advantage although Leinster’s game will suit the higher tempo the firm surface brings. It would be disrespectful to Glasgow and many of the 47,128 fans that turned out at Celtic Park last season for the final to believe this is just another roll over game for Leinster. Cullen knows that.