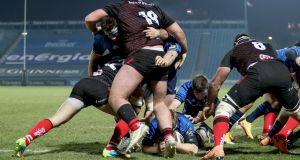 The unthinkable, namely successive Leinster home defeats in this competition for the first time, seemed conceivable when Ulster skipped off with a 9-5 interval lead after scoring two John Cooney penalties without reply while Marcel Coetzee was in the bin.

Leinster had scored the only try of the first half and looked to have more width, pace on the ball and footwork, but Ulster’s defence had been superb whereas Leinster had slipped off tackles and conceded soft penalties. Johnny Sexton had, understandably, looked rusty after surprisingly being named after completing return-to-play protocols in six days.

But, amid an increasing din from both sets of players and especially on the sidelines, all changed, changed utterly upon the resumption. Leinster played more directly, generated more tempo and rather than risk more heartache at the breakdown, opted to pin Ulster back with the variety of Sexton’s kicking game, whether finding grass or going to the air.

They also had much the better offloading game and mixed things up with quick taps, although it was the cohesion and potency of their forward pack, sustained by the unrelenting quality of James Ryan, Caelan Doris et al, which turned the screw as they scored maul tries either side of a fine finish by Rob Henshaw, who with the ever-dangerous Hugo Keenan and Jordan Larmour was proof of that better footwork.

Leinster’s need was the greater and the net effect was a bonus-point statement win which halved Ulster’s 10-point lead atop Conference A. They have two games in hand, albeit away to the Scarlets and Munster, and still have to travel to Ulster, so there’s a few more twists and turns yet to see who tops the conference and, presuming the Rainbow Cup goes ahead, secures a place in the final as they search a fourth title in a row.

Ulster had the kick-off and the early set-pieces in the Leinster half, but this merely resulted in four strong defensive sets by Leinster. Ulster followed up with one of their own and when Leinster were pinged for blocking from one of Cooney’s fine box kicks for the latter to open the scoring. By contrast, Sexton’s first shot at goal wasn’t one of his cleanest and screwed wide but with a potentially easier kick he opted for the corner.

From Rhys Ruddock’s take and a good maul set-up, Seán Cronin broke for the line. He was held up short, as were a succession of close-in drives, before Jamison Gibson-Park opted for a long skip pass to Dave Kearney by the touchline.

A try didn’t look on but the in-form winger maintained his prolific run to pirouette out of a poor hit by Billy Burns to score by the corner flag. Again Sexton didn’t strike the touchline conversion well and didn’t find touch after Doris won a turnover penalty.

Coetzee was binned on the half-hour after TMO Joy Neville brought Andrew Brace’s attention to his second high hit, this one on Cronin. But Ulster upped their energy and work-rate in defence, earning a penalty through Tom O’Toole and then another for Cooney to kick them back in front.

After a jinking snipe by Gibson-Park and link with James Ryan, this pattern was repeated after Jordi Murphy won a penalty in the jackal before Cooney landed his third penalty to leave it 9-5 for Ulster at the break after Andrew Porter went off his feet. However their swagger was soon diluted.

Leinster restarted with a renewed intensity and tempo, Sexton pulling the strings and rewarding a couple of good hit-ups with a nicely angled grubber and then putting two penalties into the corner. The pack mauled over for Cian Healy to claim the touchline and Sexton even landed the touchline conversion. They followed this with a nicely executed two-phase attack, Hugo Keenan breaking the line and releasing Kearney. The fullback again carried strongly, and Larmour almost danced in.

From the scrum, Leinster pummelled the Ulster line before Sexton went to Henshaw and he beat Cooney’s tackle to score Leinster’s third try and push them 17-9 ahead. Suddenly tap pens were augmenting offloads and big plays, as Cronin peeled off a restart maul for a big carry and kick ahead, before Sexton countered brilliantly up the touchline. Ulster scrambled for their lives, and were fortunate when Burns was not pinged for offside when turning over one attack before being replaced by Ian Madigan, whose last appearance at the RDS was as a replacement for Leinster in their semi-final win over Ulster in May 2016.

Ulster broke out for Cooney to make it 17-12 after James Tracy came in from the side. All results were now possible bar an Ulster bonus-point win. But Leinster upped the ante further in searching for their fourth try and went to the corner again. Tracy hit Ross Moloney at the front and was then driven over from another superbly set-up maul. Ross Byrne took over the kicking duties and landed the touchline conversion for 24-12.

Ulster came in desperate search of a try for a losing point, but a ferocious assault of 20-plus phases was met with equally determined resistance before Byrne picked off an intercept. It completed Leinster’s statement win.