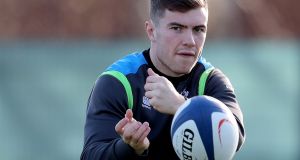 Luke McGrath will captain Leinster when they take on Scarlets on Saturday. Photograph: ©INPHO/Dan Sheridan

It has been a weird few weeks for Luke McGrath. The Leinster scrumhalf had one foot in Ireland’s breathless win over France in Paris and one foot out. His heart, at the end, was with Johnny Sexton’s long-range boot, but his head was hoping Joe Schmidt would pull somebody off and send him scuttling into the match.

As the Irish replacement saw it, the endgame was writ large. Conor Murray was going nowhere. McGrath and Joey Carbery had the best view in the Stade de France. But in that sort of high-stakes ending nothing can change. The 41 phases and a drop goal was cold comfort to McGrath. He was involved but not, part of the squad but not part of the victory.

“Myself and Joey didn’t get on. It was such a hard game for a nine and 10 to come in. No, I wouldn’t feel too hard done by that,” says McGrath.

For the game against Italy, Kieran Marmion was brought in as the replacement scrumhalf. He got his run as Schmidt moved to protect one of his main assets in Murray. Those are the breaks. Even Schmidt could not determine how either of the games would unfold.

Schmidt’s thinking plays a large part in the mindsets of players trying to break into the Irish team, and for McGrath Leinster is now the conduit back. Time spent on the Irish bench means no game time on the pitch anywhere.

It was as Schmidt planned it: time with the provinces for both scrumhalves and time in the replacements. In that rotation it was Marmion who got the break.

Now Scarlets offer an opportunity for Leinster to right last week’s last-gasp defeat to Edinburgh, and also an opportunity to impress the eyes McGrath knows are on him. It’s all been a little, well, weird.

“Yeah, maybe Joe looked at that before the Six Nations for the first two games,” says McGrath. “But he has told me things to work on. Go back and get some game time against Edinburgh, which I did. There’s no [Irish] game this week so hopefully I can play well against Scarlets.

“Obviously it was great being involved with France. I know I didn’t get on but it was a great spectacle to be there and see that last 40 odd phases. It was unfortunate I didn’t get selected against Italy. But I ended up going over to Edinburgh and we lost in the last few minutes. I’m just happy to go back and get a bit of game time with Leinster.”

Given the injury profile of the Irish team, McGrath, who captains Leinster today, understands that opportunity presents itself in many forms. Tadhg Beirne, a close friend, has also taught him the power of determination.

Blighted by injury and no senior contract offer from Leinster, Beirne cut loose and went to Scarlets on a thin contract, where he spent his fair share of time outside the main playing group.

Last season, he became a regular in the team and one of Scarlets’ best players. Noticed by Schmidt, the versatile player was invited to the Irish training base at Carton House. Playing next season with Munster, he may become a more permanent fixture at the Irish base. All because he refused to give up.

“He was probably one of the best players in the league last year and he has continued that form. I think he’s getting an average of almost three turnovers a game. He’s been brilliant for them. I know Joe is a big fan.”

Beirne’s career path has become something of a parable, where work ethic and belief ultimately pays dividends. It is a trait Schmidt admires. While McGrath has been cut loose for now from Ireland, Schmidt does offer guidance and optimism.

“He gives you constructive criticism,” says McGrath. “Being picked on the squad is a massive thing. He obviously rates you. You know you deserve to be there so you have to take a lot of confidence from that.

“He was specific in telling me things to go back and improve on, what he’s looking for in scrumhalves. He tells you a little bit more one-on-one. Obviously he can never promise. But yeah, he does leave you with optimism.”