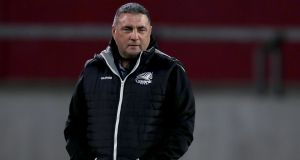 In fact it’s something of a reunion this weekend. Winger Rory Parata and Galway-born fullback Ciaran Gaffney will also reacquaint themselves with former colleagues.

This is a block in which Kieran Keane’s Connacht side ought to make hay. Opposition sides are generally shredded by players sucked into the Six Nations Championship.

Connacht also have a winning streak ongoing and are aiming to make it eight home wins in a row in all competitions stretching back to September.

After beating Ospreys last week, few could now fancy the only other side below them on the conference table.

Finlay Bealham is one of four changes for Connacht. With Tiernan O’Halloran sidelined with a hamstring injury, Darragh Leader comes in at fullback.

Sean O’Brien’s return from injury gets him the number eight shirt. He will be joined in the back row by openside Naulia Dawai and captain Eoghan Masterson. Lock Gavin Thornbury also come in to start.

International scrumhalf Kieran Marmion and lock Quinn Roux are among the replacements along with John Muldoon and Conor Carey who remarkably has being named in every match-day squad this season.

Bradley’s arriving will draw some response from Zebre. But on the face of it and despite the inclusion of Carlo Canna, who played at 10 against Ireland, probably not enough.