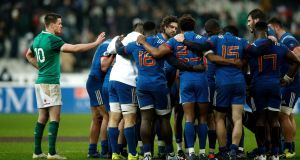 Ireland’s Johnny Sexton looks on as French players form a huddle following their defeat in the Six Nations clash at Stade de France in Saint-Denis, outside Paris. Photograph: Yoan Valat/EPA

While many Irish supporters were wearily making their way back from France to Ireland, I was doing the opposite. Dublin to Barcelona, then a drive back to my base for the Six Nations, in France just across the Spanish frontier.

The autoroute from Barcelona into France is infamous for drug runners, who pack cars full of drugs, and drive like the clappers in the hope of avoiding the authorities. There is an increasingly heavy police presence at the French boarder near Perpignan.

As I stopped to pay the toll on the autoroute, driving my 2009 Fiat 500, hardly a vehicle from The Fast and the Furious, I was somewhat perplexed as a full Swat team descended on my car. A forward pack of eight automatic machine gun-toting, balaclava-wearing, wild west pistol-strapping, clad in black, bullet proof vest-wearing, very serious looking dudes, were all about my poor little Fiat.

At this point several things start spinning about my very addled brain.

Did some kingpin plant several large blocks of cocaine in the door cavities while the car was in the long-term car park? Was I an unsuspecting drug mule? Is this my Jason Bourne moment?

A washed up old coach turned pundit, wrongly accused of running drugs goes on the run. If only I had SAS training, and a couple of hundred grand stashed away in a safe deposit box in Zurich. All I am trained to do is to get the eight gendarmes together and organise them into a scrum. Not a very useful asset at the moment.

A pair of steely dark eyes appear at the drivers window.

After another brief panic attack, (I know I have the bloody thing here somewhere, I just went through customs at the airport), eventually, I pass across my Irish passport.

“Out of the car.” A thin film of sweat begins beading across my forehead. Get out of the car?

I slowly unfold from inside my little bus. No sudden movements, as they say in the movies.

He glares at my open passport. “Irlandais?” I was going to correct his English and say its pronounced Irish, but a quick glance at his semi automatic and I am content to be “Irlandais” all day long. I mutter a very meek, “Oui.”

He looked up and made very intimidating eye contact. There was no compassion, no joy, no room to negotiate in those reptilian orbs.

“Johnny Sexton is a thief.”

I did not answer – I was still trying to compute.

“You Ireland . . . you stole our game. France should have won.

“You are the first Irlandais I meet, so you are under arrest.”

His eyes were blank, but I could just notice the tiny muscles at the corner of his mouth and eyes bend.

The other seven of the pack squared up towards my car. It’s a little Fiat 500! What are they so worried about?

But they were smiling. Is this whole thing about Jonny Sexton? It was an unbelievable kick, but I refuse to go to jail for a drop goal. Even for one as good as that. When will the campaign to release the Perpignan One commence?

After some good banter, in which handcuffs were threatened and the promise of vengeance in Dublin next year was guaranteed, I climb back back into my car, acting desperately hard not to show that I just had the bejaysus scared out of me.

As my beloved Fiat slowly begins to pick up speed, I begin to think.

Ireland dominated possession. They forced France to make 253 tackles to Ireland’s 113. Despite this dominance, Ireland had no scrums and only one lineout in the French 22. Ireland did not score a try. I have to agree with the gendarme, Ireland stole that win in Paris.

But this week it’s only Italy. As much as I admire Conor O’Shea, the coach can only do so much. He has several players well below international standard. It is the Italian system that is to blame not the coach. Italy were desperately disappointing against England and have a lot more pain in store in the coming weeks.

In the last two Six Nations fixtures against Italy, Ireland have scored 121 points and only 25 against. There is no evidence that this week will be any different.

Unlike my little Fiat, England’s attack never got out of second gear. Yet they scored almost 50 points against a poorly organised Italian defence. Especially through the centres, at set play.

While Italy were very poor, England were good. The men in green will have to improve markedly over the tournament, to have any hope of winning at Twickenham. When England hit top gear, they will be exceptionally difficult to defeat.

The gendarmes receded in my rear vision mirror. I waited until there was a bend in the autoroute and I am sure my interrogators could not hear or shoot me.

Yes, Ireland were below their best but, they have a rare win in Paris, they have gained energy and it’s Italy at home. The Grand Slam and Championship are alive.

One last check of the mirrors to confirm I am safe before I sing, very loudly, to the tune of Guantanamera . . .

Theres only one Johnny Sexton,

Theres only one Johnny Sexxxtonnn