Leinster name their team for Pro14 return against Zebre 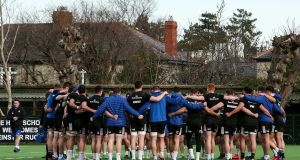 Leinster take on Zebre in the Pro14 on Saturday, and the visit to Stadio Zaffanella will be their first match in the competition since their narrow win over the Scarlets on January 25th (Kick-off 2.30pm - live on eir Sport).

Zebre for their part haven’t played since a 61-28 away loss against the Cheetahs on the same weekend.

Head coach Leo Cullen named his team for the trip on Friday, selecting Dave Kearney at fullback with Adam Byrne on the right wing and Barry Daly on the left.

Conor O’Brien and Rory O’Loughlin are the centre combination with Jamison Gibson-Park and Ross Byrne the halfbacks.

Ross Molony and captain Scott Fardy will start in the secondrow with Josh Murphy at blindside, together with Max Deegan and Caelan Doris who complete an exciting looking back row.

Having been an unused replacement in the win against Scarlets, academy forward Jack Dunne is again named in a match day 23 and will hope to make his debut in Viadana.