Stuart Lancaster: Ireland now have time to gel as a team 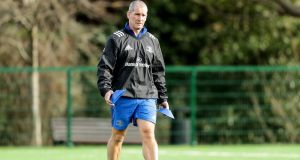 Leinster coach Stuart Lancaster: “The way the game played out I think England deserved it in the end.” Photograph: Laszlo Geczo/Inpho

Watching England’s victory over Ireland at the Aviva stadium, Stuart Lancaster tempered any emotional investment in the outcome by seeking refuge in the analytical mindset of a coach. Some two and a half years coaching the Leinster contingent in the Irish team weighed against his heritage and a former incarnation as England coach, during which time he nurtured and developed several players in a white jersey.

His observations touched on the mental side of the sport and also the fine margins that are invariably decisive in a game of that ilk.

He explained: “Obviously it’s amazing how the motivation of being hunted or the hunter, how it affects teams and certainly people were after England last year in the same way that people are after Ireland this year; England have played that role well so far.

“I don’t think it was the expectation or lack of preparation [from an Irish perspective]. There were two tries that could have been avoided, certainly in the first half. You think of the first one: on edge defence they [Ireland] were numbered up. The second one, if he [Jacob Stockdale] catches it and puts it down over the line they [England] don’t score so the game is different.

“The way the game played out I think England deserved it in the end. But Ireland have got too many good players and too many good coaches in the system not to come back from that. In some ways you learn a lot more from when you lose than when you win. It’s painful to lose, but I think Ireland will benefit from it in the long run.”

Lancaster said in drawing players from different provinces or clubs with disparate philosophies and systems, creating a harmonious playing environment can be a little more fraught at the start of a Six Nations campaign.

“The challenge of international coaching is quite different. With club coaching you’ve got the players day in, day out, week in, week out, playing your way so it’s easier to create that [style of play that you want].

“That’s what Ireland will be searching for now, that cohesion, that flow that we have seen. It’s not like it’s not there. We have seen it [against] New Zealand, in the four November wins. Now they have a week off to train in, and then a week to prepare for Italy to try and get that cohesion and flow.

A central tenet to England’s success so far has been their kicking game – it has been the reverse for Ireland to some degree. Lancaster argued that it’s not about kicking or not kicking per se but “being adaptable to the opposition”.

“New Zealand not so long ago kicked more than any team; there is a perception they don’t kick but they actually do. It’s about picking the right tool at the right moment.”

On a day when Sean O’Brien announced that he would be joining London Irish after the World Cup, Lancaster spoke warmly about a player who will be missed.

“When you lose a player of Sean’s quality everyone’s disappointed. In an ideal world you keep all your best players until the very end.

“It was almost out of Leinster’s hands as soon as that national contract wasn’t offered, and Seanie got such a fantastic offer from England. It’s a fantastic signing for London Irish.

“I don’t think anyone’s underestimating the impact Sean has had. I’ve coached many great players, and he’s certainly held in the highest regard in my mind because of the way he conducts himself on and off the field.”