Leinster keep up perfect start thanks to brilliant second-half showing 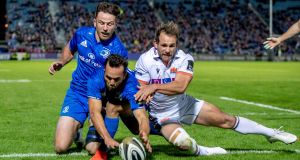 Leinster’s Jamison Gibson-Park, supported by Hugo Keenan, touches down to score a try despite the attentions of Edinburgh’s Nic Groom during the Guinness Pro 14 game at the RDS. Photograph: Morgan Treacy/Inpho

Leinster continued their unbeaten start to the Guinness Pro 14 with a third successive victory, largely the product of an excellent second half, amassing 28 points without reply that took the game away from Edinburgh at the RDS.

Once they home side found their rhythm and were more precise and ruthless in execution they dominated the visitors and were full value for the margin of victory, backboned by six tries. Scott Fardy led by example in a high-quality display and was ably supported by his pack in which Peter Dooley, Devin Toner and Caelan Doris also stood out.

Jamison Gibson-Park was a sharp presence at scrumhalf, Ross Byrne controlled things intelligently at outhalf, some of his passing in windy conditions first class. Joe Tomane, despite a yellow card, was excellent while fullback Hugo Keenan was arguably the pick of a backline that was slightly underutilised at times.

The first half was dominated by referee Ben Whitehouse – his whistle dominated the entire match in truth as much as the rugby played by both teams – and it took almost an hour to complete.

Leinster might have been 13 points up in the opening quarter but Ross Byrne was off target with two penalties and a try was correctly disallowed for blocking, before scrumhalf Gibson-Park gave them the lead with a sharply taken score, pouncing on a loose ball over the Edinburgh line.

It took the visitors 21 minutes for the first foray into the Leinster 22 and by the time they left, Leinster were down to 13 players – Michael Bent and Tomane received yellow cards – and Edinburgh had snatched the lead with a smartly taken try from right wing James Farndale, converted by Jaco van der Walt.

The Scottish side initially won a penalty for offside 12 metres from the Leinster line and opted for a scrum. What ensued was four scrum penalties to Edinburgh, two re-sets, a yellow card for Bent and then another for Tomane who slid in and made contact with his knees carelessly rather than maliciously as Farndale grounded the ball for his try, all of which took six minutes. It served to fire up the home side and their supporters.

Leinster responded by claiming a try in first-half injury time, kicking a penalty to the corner and after a lineout maul was stopped short, the home side pounded around the fringes until Bent forced his way underneath a gaggle of defenders. Byrne added the conversion to make it 12-7 as the teams headed for a belated break.

The Irish province had the bonus point wrapped up within eight minutes of the restart, number eight Doris and flanker Scott Penny bludgeoned over with Ross Byrne tagging on the conversions.

The Leinster bench consolidated the momentum on the scoreboard, Michael Milne burrowing over for a try and then replacement scrumhalf Rowan Osborne finishing off a sweeping counterattack that contained a gorgeous break from Jimmy O’Brien and a lovely offload from James Lowe.