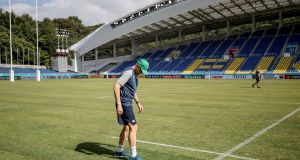 Ireland head coach Joe Schmidt checks the surface at the Hakatanomori Stadium in Fukuoka ahead of the Rugby World Cup Pool A game against Samoa on Saturday. Photograph: Dan Sheridan/Inpho

There are far bigger issues at stake this weekend in Japan but so much about this Pool A finale is unnerving, not least one suspects for Joe Schmidt. Ireland may have avoided Typhoon Hagibis, but there are enough ‘uncontrollables’ out there to drive Schmidt mad.

It’s not just the very real prospect of the Japan v Scotland game being cancelled and thus removing the opportunity to top the group and earn an eight-day turnaround for a quarter-final against South Africa.

There’s also the state of the relaid Fukuoka pitch.

At their captain’s run on Friday, Schmidt could be seen pointedly stamping on the surface in the middle of the pitch and calling over Ger Carmody and scrum coach Greg Feek, while a clip also emerged of Chris Farrell being able to lift some of the turf and place a rugby ball underneath it.

This has evidently angered World Rugby, for whom the mutual affection with Schmidt is less than warm, sufficiently enough to release a statement in response to queries from the Irish media about this vexed subject.

“We are confident in the integrity of the new Fukuoka pitch for Ireland v Samoa,” began the statement, which explained that the significant wear caused by the France versus USA match after heavy rainfall caused by Typhoon 17. The primary driver was player welfare.

“The tournament has dedicated nurseries where back-up turf is meticulously prepared in line with Rugby World Cup standards. While the look of the turf may not be perfect as would be expected with a very recent installation, we are confident that the pitch will perform superbly.”

Clearly this confidence is not shared within the Irish camp. Criticised for the way it churned up during both the previous games at the venue, the Irish players said the pitch felt firm and fast underfoot, but it is in a poor state and with rain forecast the scrums could cause some serious damage.

Feek commented: “Well, you guys are pretty smart individuals, you would have seen the pitch yourselves. Obviously they told us and both teams know about it, we know they they had to relay the pitch. We went out there and just had an inspection and we have been given all the assurances by World Rugby that it’s safe to play on and that’s all we can ask for.

“The referee will be aware of it, so that’s the key. All the communication is there.”

All of which adds to the feeling that Ireland will need another strong start, which is something they’ve managed to do thus far, leading Scotland by 19-3 after 25 minutes, Japan 12-3 by the 21st minute and Russia 14-0 after 14 minutes. As the match and the pitch wears on, it may become increasingly difficult to score.

Even if Ireland beat Samoa with a bonus point, anything less than a Scottish win in the group stage finale against Japan in Yokohama on Sunday would consign Ireland to a quarter-final against the All Blacks.

In other words a cancellation due to the effects of Typhoon Hagibis, and an ensuing 0-0 draw, or an actual draw on the pitch would be enough for Japan to top Pool A. So Ireland would need a favour from their Celtic rivals, although there is a strong feeling in the Irish camp, as well as Scotland’s, that this can be achieved if the game goes ahead. But that’s looking unlikely.

But leaving all of that aside, Ireland are back in familiar territory in that they could do with a statement performance, in addition to the victory they require to nail down a quarter-final place.

After the back-to-back warm-up wins over Wales, which do not look all that bad now, and the emphatic nature of the 27-3 victory over Scotland, self-belief has been dented. As a test of the physicality that may well lie in wait, not least were that match to be against the Springboks, this could also be a useful source of preparation for the quarter-finals. The genuine fear within that is the possibility of Ireland emerging with some physical, as well as mental, damage.

The stakes have also been raised by the selection of what amounts to something resembling a first-choice Irish pack, as well as the record equalling Conor Murray-Johnny Sexton halfback partnership. They need to establish foundations akin to the display against Scotland for Ireland to carry real belief.

The same kind of set-piece security and ruthless efficiency in the Samoan territory would instil this Irish squad with the requisite self-confidence for a quarter-final against either New Zealand or South Africa. And they can’t be going into such a potentially monumental game with any baggage.

It would be every bit as reassuring if Murray and Sexton also emerged in good form and health, while the return of Robbie Henshaw for his overdue first game of the tournament could be like a new signing. Alongside Bundee Aki, whose Samoan heritage must make this an extraordinarily special game for him, a big-tackling, hard-carrying and dynamic performance from Henshaw would be a boost not only for himself but the entire squad.

And then there’s Jordan Larmour. For all the negativity around Ireland’s campaign to date, all of the outside backs have looked in prime nick, and in veering off the playbook and inventing that final try against Russia, Larmour showed what kind of attacking dimension he can bring to this team.

With that pitch in mind, the feeling persists that this might be an ugly one, but these things are relative. The less ugly and physically damaging the better.

Forecast: Ireland to win, but that handicap looks a little steep.