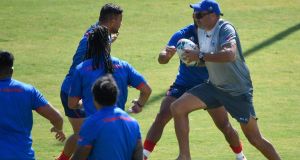 Samoa’s head coach Steve Jackson takes part in training session during the captain’s run at the Fukuoka Hakatanomori Stadium on the eve of the Rugby World Cup Pool A match against Ireland. Photograph: Christophe Simon/AFP via Getty Images

Joe Schmidt’s first match as Irish coach was a 40-9 win over Samoa in Dublin six years ago and, as ever, Samoa’s plans beyond this game remain unclear, with head coach Steve Jackson only contracted until the conclusion of the World Cup, although he believes he will agree a new four-year deal with the Samoan RFU.

Back in 1997, when aged 24, Jackson stopped off in Fiji for his marriage to Penny and then went to Cork to spend a season with Dolphin. “What a better place to have your honeymoon?” recalls the New Zealander with a smile.

He’d missed out on the Auckland squad, then coached by Graham Henry. “Within five hours I got home and some agent, I couldn’t even tell you his name now, gave me a phone and faxed me a contract.

“Aw mate, loved it,” he says of his season with Dolphin. “I’ve still got the jersey. I always tell old stories about my time at Dolphin.”

He enjoyed a playing career with Southland and other provinces in New Zealand, and a stint in France with Orleans, before discovering he possibly had more of a knack for coaching than playing after a bad finger injury caused his retirement. That said, he did play as a lock for the New Zealand Under-19s and the Maoris.

He coached with Tana Umaga at Counties before winning the Championship as a head coach with North Harbour and after a stint as forwards coach with the Blues took over Samoa last year.

Samoan culture is, he says, similar to Maori culture. “It’s brilliant. Everyone talks about things that are going on within the Union but their heart is in the right place. They just want the team to be successful. There’s a long way to go.

“We’ve just got to get a little bit more development in the islands and making sure that we capture some of these players before they head to New Zealand or Australia. Money is a big motivator to look after their families. It does make it tough.”

His, and Samoa’s big bugbear, is the amount of Samoan qualified players who could be part of their squad but aren’t. “I think there’s about 67 if the eligibility and things like that changed. We had about 90-odd players down on the list.”

Many of them would be players who are effectively debarred from taking time away to play for Samoa.

The proud Samoans will tackle all day, and bring plenty of spirit, especially from the start, and among their full-time side they have a very useful backrow in the Bristol pair of Chris Vui and Jack Lam, and the London Irish openside TJ Ioane.

Their grievances and sense of injustice at this World Cup has been well chronicled, and for many of their team this could be a last World Cup match. For Samoa, their motivation is every bit as great as Ireland’s.