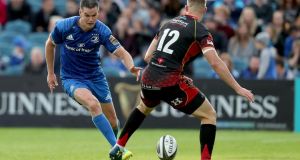 Johnny Sexton kicks past Jack Dixon of the Dragons during the Guinness Pro 14 game at the RDS. Photograph: Dan Sheridan/Inpho

Seven tries, some excellent individual performances and a nice fluency to their patterns at times were the headlines from Leinster’s facile Guinness Pro14 victory at the RDS on Saturday evening.

The Dragons were outclassed and despite clinging on to Leinster coattails for much of the first half, the simply couldn’t sustain the momentum, especially when a man short, initially through Ross Moriarty’s yellow card and later because of injuries.

The home side piled on three tries while Moriarty was in the sin bin and that effectively scotched the valiant efforts of the Dragons. A concern for Bernard Jackman’s side is that the margin of victory could have been even more emphatic if Leinster’s option-taking had been a little better early on.

Jonathan Sexton gave his team direction while Garry Ringrose and Robbie Henshaw used their feet to good effect to beat the first tackler. Van der Flier’s performance was remarkable given that it was his first match back since picking up an injury with Ireland last February, making a nuisance of himself at the breakdown, linking the play and producing a huge tackle count.

There are always work-ons, three turnovers at the lineout, while also being a little more ruthless and precise in finishing off opportunities.

Leinster’s rugby version of tiki-taka was both easy on the eye and effective in creating line breaks and the only cavil was that the neat approach work didn’t yield the landslide of points it might have with a little better decision-making. It cost the home side three tries but ultimately it didn’t matter given the final score.

The inside pass guaranteed huge currency in terms of breaks and it was central to most of Leinster’s tries on the day. They had obviously identified the chinks in the Dragons’ defence and worked those pressure points excellently.

The home side squeezed in some defensive work just before the interval as the Dragons belatedly managed to hang onto possession through more than a dozen phases. It took them to within a couple of metres of the Leinster line but Andrew Porter rescued his side by latching onto the ball and proving to be an immovable object to force a penalty turnover.

Despite the outcome it proved a welcome respite for the visitors from the relentless rearguard action they fought for most of the opening 40 minutes. For all the pressure Leinster exerted, they only led 10-0 at that point, but then the Dragons self-destructed in first-half injury time; or rather their number eight Moriarty suffered a brain freeze.

He barrelled into Sexton long after the outhalf had passed the ball and after being directed by the television match official Olly Hodges to view the incident on the big screen, referee Quinton Immelman brandished a yellow card. It was a needless collision and an expensive transgression.

The home side had been awarded a penalty six metres from the Dragons line for another offence. They opted for a scrum and with Moriarty in the sin bin,  Conan broke from the back of the scrum and his inside pass allowed Van der Flier to scoot under the posts. Sexton added the conversion to push his side out to a 17-0 interval lead.

Josh Lewis kicked a penalty for the Dragons two minutes after the re-start when Van der Flier was penalised for not releasing in the tackle but the home side snuffed out any hopes of a mini-revival and also confirmed a bonus point to boot with a brace of tries in quick succession.

Gibson-Park scored the first and created the second for Larmour, while James Ryan played a primary role on both occasions with well judged inside passes, getting his hands free through the tackle and spotting his scrumhalf on an inside trail line on both occasions.

Larmour showed his blistering speed to outpace the cover but Gibson-Park deserves huge credit for his beautifully weighted kick through. Sexton converted both and despite conceding a try to Dragons fullback Jordan Williams’s superb individual effort, Gibson-Park’s second try and another from replacement prop Tadhg Furlong saw Leinster accelerate away on the scoreboard to 45-10.

Gibson-Park trotted off to a deserved ovation to be replaced by Ireland under-20 scrumhalf Hugh O’Sullivan, the latter making his debut for the province. An injury to Hallam Amos saw the Dragons play the last 14 minutes with 14 players, while the raft of changes meant that the game lost a little cohesion in the final quarter.

There was still time for the home side to embellish the evening with a seventh try, a fitting reward for the hardworking Fardy, with Noel Reid tagging on the conversion as Leinster moved through the 50-point milestone.

Replacements: R Bevington for Harris, B Nansen for Screech (both half-time); O Griffiths for Wainright (47 mins); R Hibbard for Dee, T Knoyle for R Williams, Harris for Fairbrother (all 48); A Robson for Lewis, J Sage for Dixon (both 57); L Brown for Harris (71).