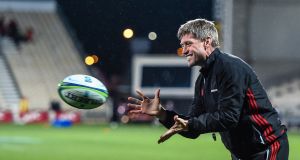 Those who attended this week’s World Rugby Hall of Fame induction ceremony in Rugby, across the road from William Webb Ellis’s old playing fields, were fortunate indeed.

To listen to the former All Black great Bryan Williams, France’s masterful Pierre Villepreux and Wales’s long-serving lock Liza Burgess was a pleasure; to eavesdrop on casually brilliant speeches from Agustín Pichot and John Eales on the power of rugby fellowship was to be further reminded there is more to sport, and those who play it, than next weekend’s result.

Quietly perched on the furthest stool was another instantly recognisable face with some compelling stories to tell. Ronan O’Gara still looks extremely trim for a 41-year-old who gave up playing five years ago and has been on the coaching road ever since.

These days he divides his time between New Zealand, where he helped guide the Crusaders to this year’s Super Rugby title, and Paris, where he worked previously with Dan Carter at Racing 92. When picking out a tie to wear at this week’s ceremony, though, there was only one possible choice. You can take the man out of Munster but his heart never leaves.

Which is why O’Gara’s recent odyssey makes him the world’s most interesting young coach. It would have been all too easy for the celebrated outhalf to slip back to his native Cork, cut his coaching teeth in familiar surroundings and await a head coach’s gig with Munster. Instead he will return in November, to the quiet suburb of Fendalton in Christchurch, to continue learning his new trade. It is just as well he is relishing every second, given he has uprooted his family, wife Jess and their five young children, to make it happen.

For now he has agreed to stay with the Crusaders for another campaign but thereafter? Let’s just say O’Gara, capped 128 times for his country, will be in demand after the 2019 World Cup: never mind Munster and Ireland, even England might consider a sharp-witted tactician who knows exactly what makes the best Kiwis tick. Top players do not necessarily make top coaches but O’Gara, as with another well-travelled outhalf Gregor Townsend in Scotland, might prove an exception to the rule.

If nothing else, New Zealand has taught him heaps, not least about rugby intellect. “Some of the guys over there are so good they’re nearly player-coaches. It’s not necessarily the household names. There’s a centre called Tim Bateman, who probably didn’t even play five games, yet his knowledge of the game is fascinating.”

O’Gara has also come to appreciate there is no big reveal – “Genuinely there is no secret but no one believes that” – when it comes to explaining the All Blacks’ consistent excellence. Instead he cites the timeless Kiwi holy trinity of hard work – “people might underestimate that” – humility and inch-perfect skill execution. “The best of it has just been experiencing it up close, with your own two eyes. You only get the full vibe of what makes a place tick by doing it that way. I can only speak for the Crusaders but it is impressive, their desire to get better, day in, day out.

“The Crusaders also have their ingrained idea of how to coach which I had no idea about in France. I was of the model of telling players what to do. They don’t believe in that. Instead they have a great mantra: ‘Tell me and I will forget. Show me and I will remember. Involve me and I will understand.’ Then the players will deliver the message because they are accountable on a Saturday. The coaches are the fall-back position to help.”

And so the creed is passed down: keep it simple, make every action count. O’Gara’s challenge at some stage will be to export these priceless qualities. “Some other people wouldn’t understand what a simple skill is. They think passing a ball is straightforward. But how you run and how you pass, they’re not simple actions. Even if you drift a metre, it is advantage defence.”

As the All Blacks have so far demonstrated in this year’s Rugby Championship, it is hard to resist when done properly for 80 minutes. The good news is that O’Gara does not believe the world champions are totally invincible as they anticipate their next European tour of duty this autumn: “Of course they can be beaten. But consistently beaten? I don’t know. They prepare very well and they keep it simple. They know their roles and they care about each other as well. You know they’ll perform, it’s whether the home nations can.

“Even coaches who coached me overestimated them. That filters down into the players’ heads so it became difficult to beat them. I don’t think the natural talent in New Zealand is better than some of the talent we have on this side of the world. Defensively in Europe we are more advanced than they are, most definitely.”

All that remains is to decide whether head coaching, and the multiple stresses that come with it, are compatible with a busy and fulfilling family life. “I’m not scared of it but you’d have to reflect really carefully, because there’s no going back. It’s a bloody hard thing to decide on, particularly when it’s six against one. The kids will go to secondary school in the next three years and I don’t want to ruin their life. I’m not prepared to put my rugby coaching ahead of the importance of their schooling.”

But, surely, one day he would love to coach with Munster or Ireland? “Of course I would. Absolutely. You’ve got to be ambitious. But it’s good to get out and see the world first. Then, if you want to go back, I think it’ll hit you hard and you’ll want to do it. There’s also a skill in saying ‘no’. Some people take jobs just because they’re being offered them or because they think they’re ready.”

When the moment comes, you suspect O’Gara will be fully primed, having seen close up exactly how the Crusaders head coach, Scott “Razor” Robertson, and his assistants operate. “Scott’s glass is never less than half-full. I was stressed and agitated as a player . . . I just see things differently now. The positivity of coaching in New Zealand has rubbed off on me.” When the Irish rover finally returns, he will do so an infinitely wiser man.

Covid-19: Barcelona’s Todibo confirms he is player to test positive 19:16
Ex-Ryder Cup player Gordon J Brand dies aged 65 18:02
McGill in control against Wilson at the Crucible 17:34
US Masters to be held behind closed doors in November 17:18
Bundini Brown: The man who invented ‘float like a butterfly, sting like a bee’ 17:00
Crossword Get access to over 6,000 interactive crosswords